Kappa Chakka Kandhari – A Slice Of Kerala in Bangalore 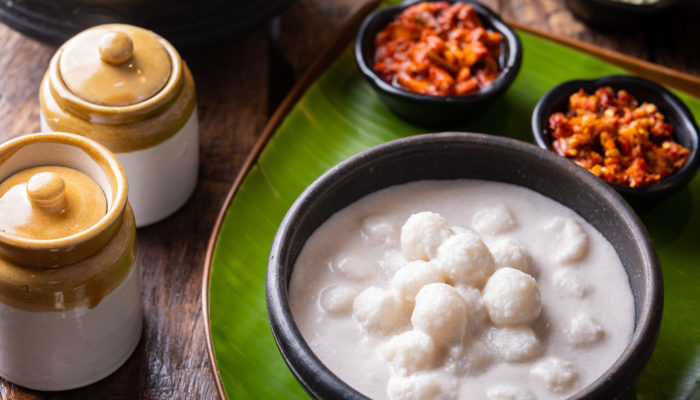 When Kappa Chakka Kandhari opened in Bangalore, there was a sudden flurry in the city’s foodscape. There was suddenly a new standard of regional food bringing the culinary gems of Kerala cuisine. The cuisine of any region comprises of local food, home food, street food, recipes that various sub cultural sects in the region and continue evolving more with time. KCK brings forth exactly that. Founded by Chef Regi Mathew, John Paul, and Augustine Kurian, this Kerala restaurant promised to pay homage to the simple, evocative food cooked by their mothers, and the memories of a slower time. First – let’s address the name, three key ingredients of Kerala cuisine – Kappa = Tapioca, Chakka = Jackfruit, Kandhari = Bird’s eye chilli. 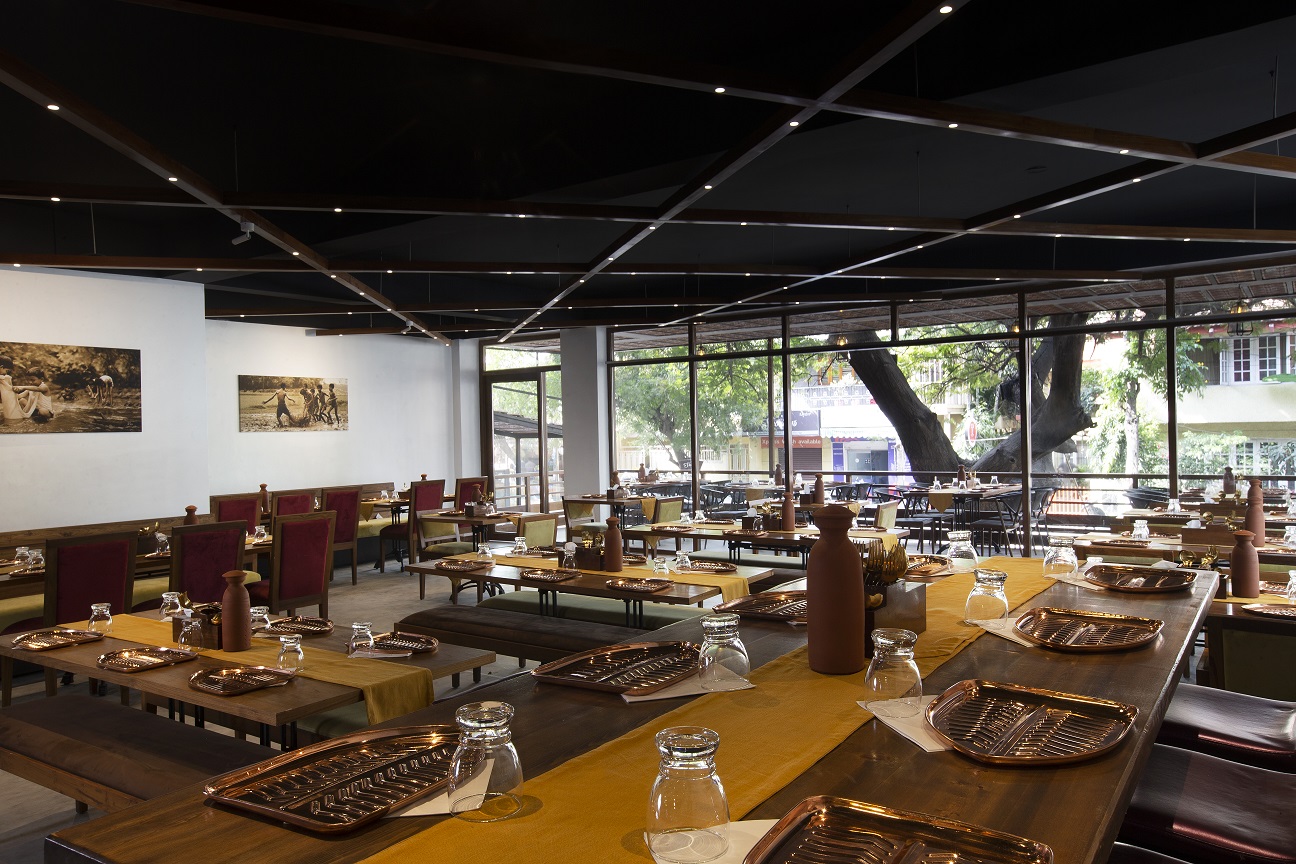 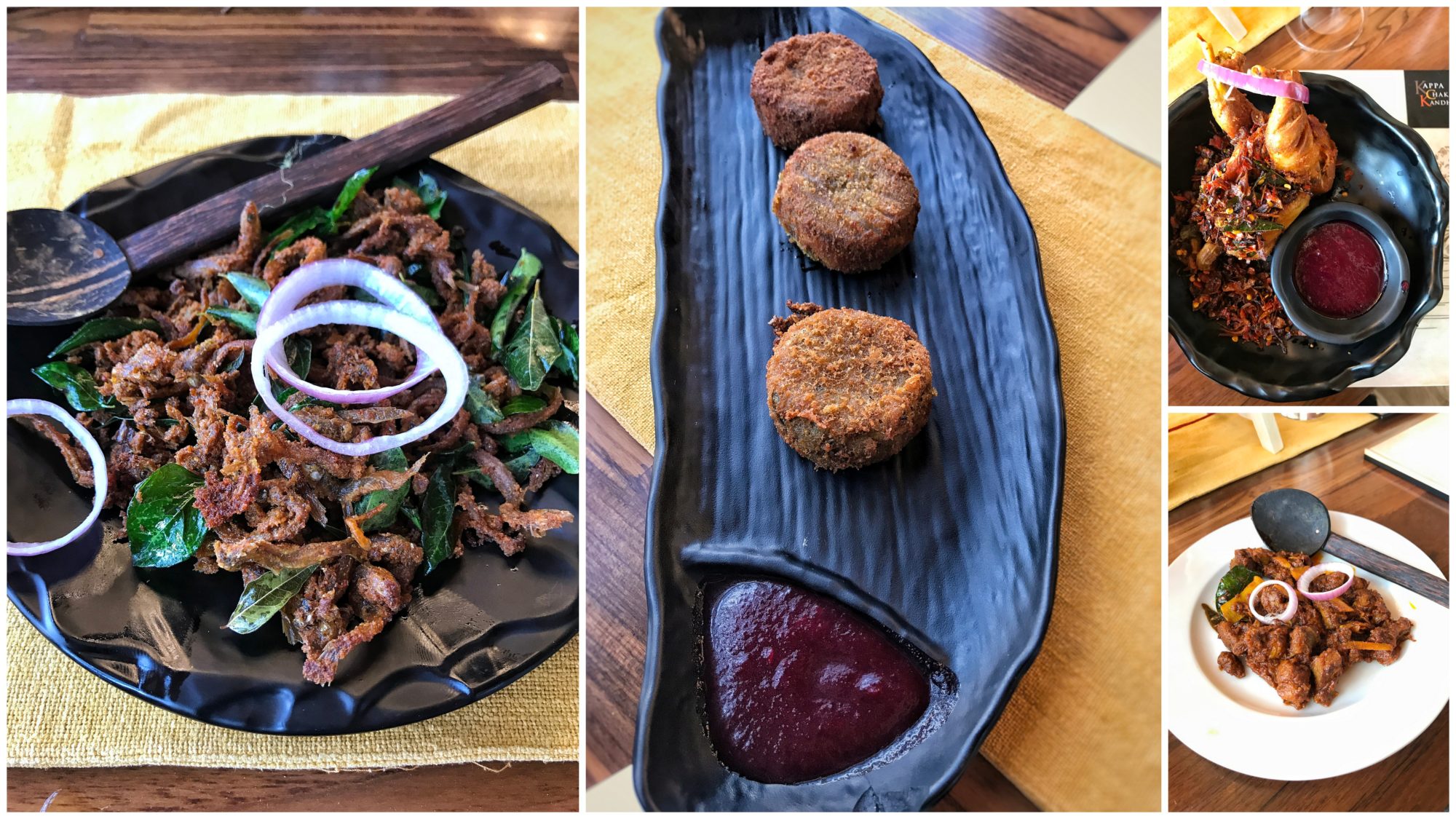 The Small Plates to start with ..

The menu at Kappa Chakka Kandhari showcases the staggering diversity of cuisine found in Kerala. This is a result of its historic position as a centre of trade and commerce. Malabar cuisine from the north, kallu shaap cuisine from toddy shops that speckle the breadth of Kerala, as well as Syrian Christian and Travancore cuisines, form the backbone of the menu at Kappa Chakka Kandhari. My first visit was when Radhika invited us over for a bloggers’ table on a Saturday. There was a lunch menu curated by Chef Regi. We saw the line queuing up outside, and saw tables quickly moving. The reputation from the Chennai outlet, and word of mouth had already spread rapidly. 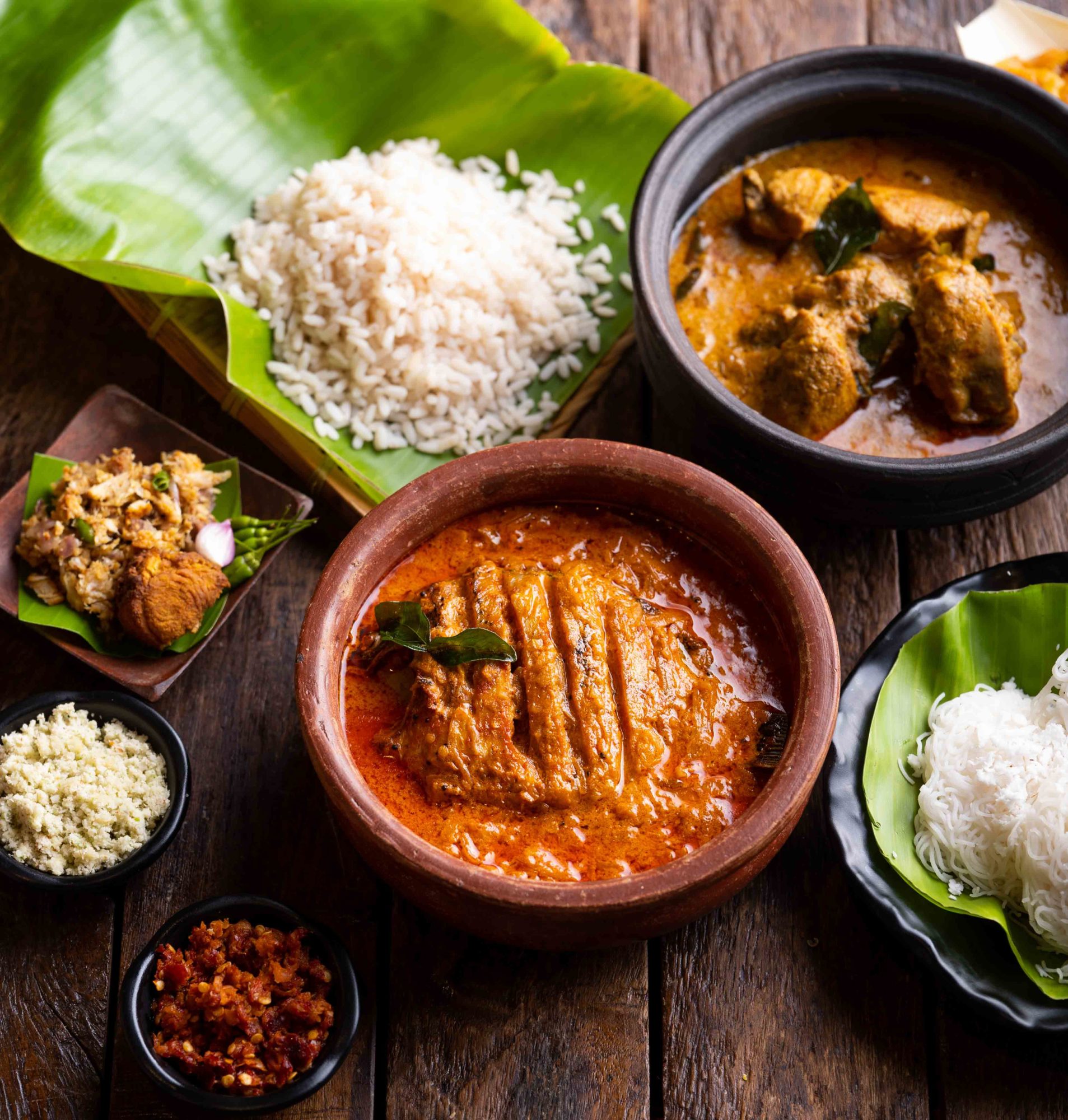 Our meal had over a dozen dishes, starting with the prawn kizhi. That’s Prawns cooked with coconut masala and wrapped in banana leaves and steamed. Loaded with grated coconut. The Mutton Coconut Fry is brilliant – cooked with Kerala spices and coconut flakes. And the Kozhuva Fry came next – a toddy shop specialty – crunchy and super delicious. The Kappa Vada is another favourite – mashed tapioca is with bird’s eye chillies and shallots, all kinds of delicious. The Vazhappoo Cutlet is also the perfect snack – banana blossoms and potato, seasoned and crumb fried. 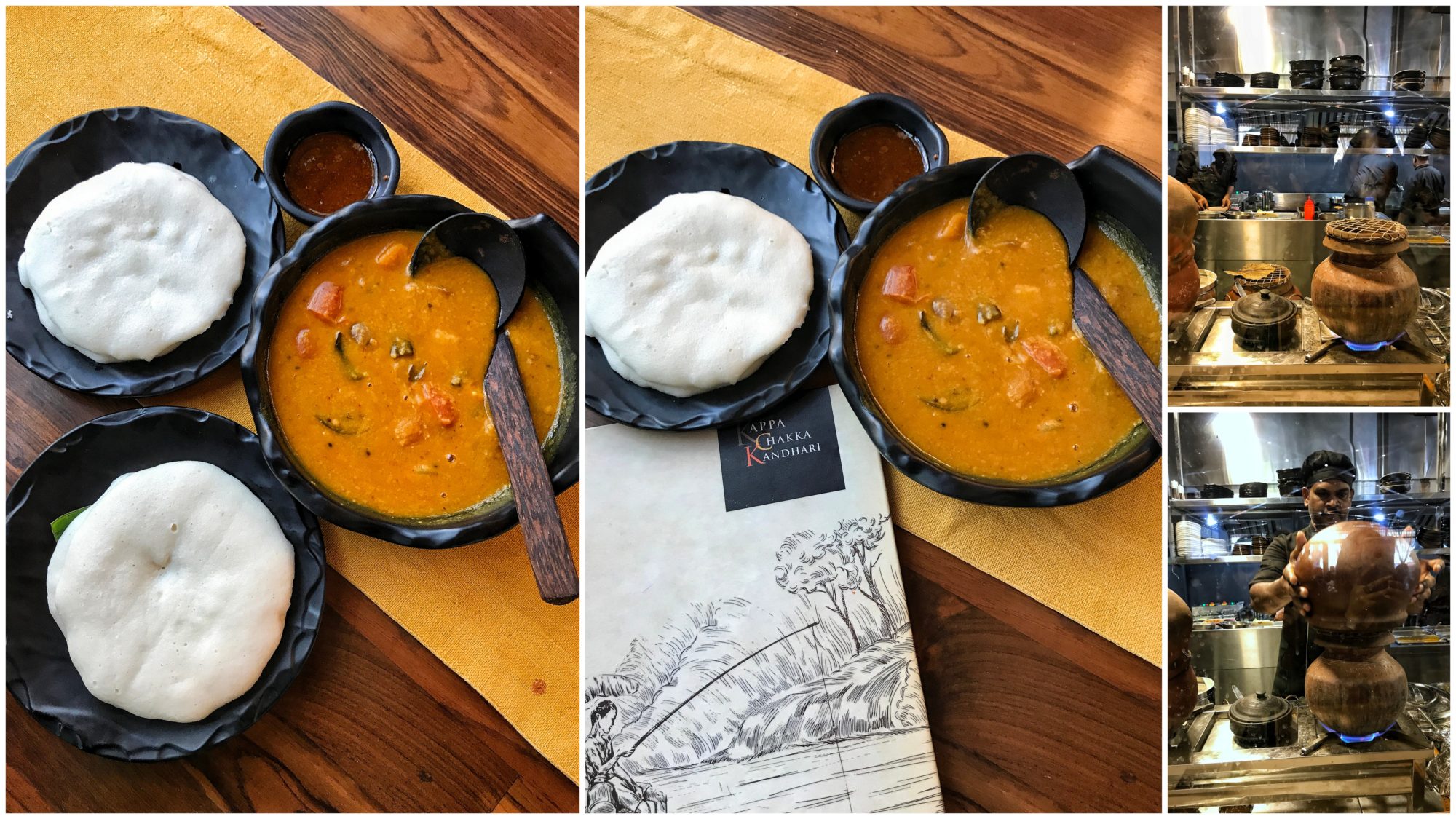 It was the first time I saw Ramassery Idli being made. Earthen pots are used to steam the idli in layers. There’s a nice sambar with it, that has drumsticks. But in my subsequent visits, I like the idli with chicken curry or mutton chops. Pidi Kozhi is another dish that’s a must-try. Rice dumplings cooked in coconut milk and served with a country-style chicken curry. There is a section of puttu biryanis, of course not really biryani, but enough to satiate a craving if one should have. 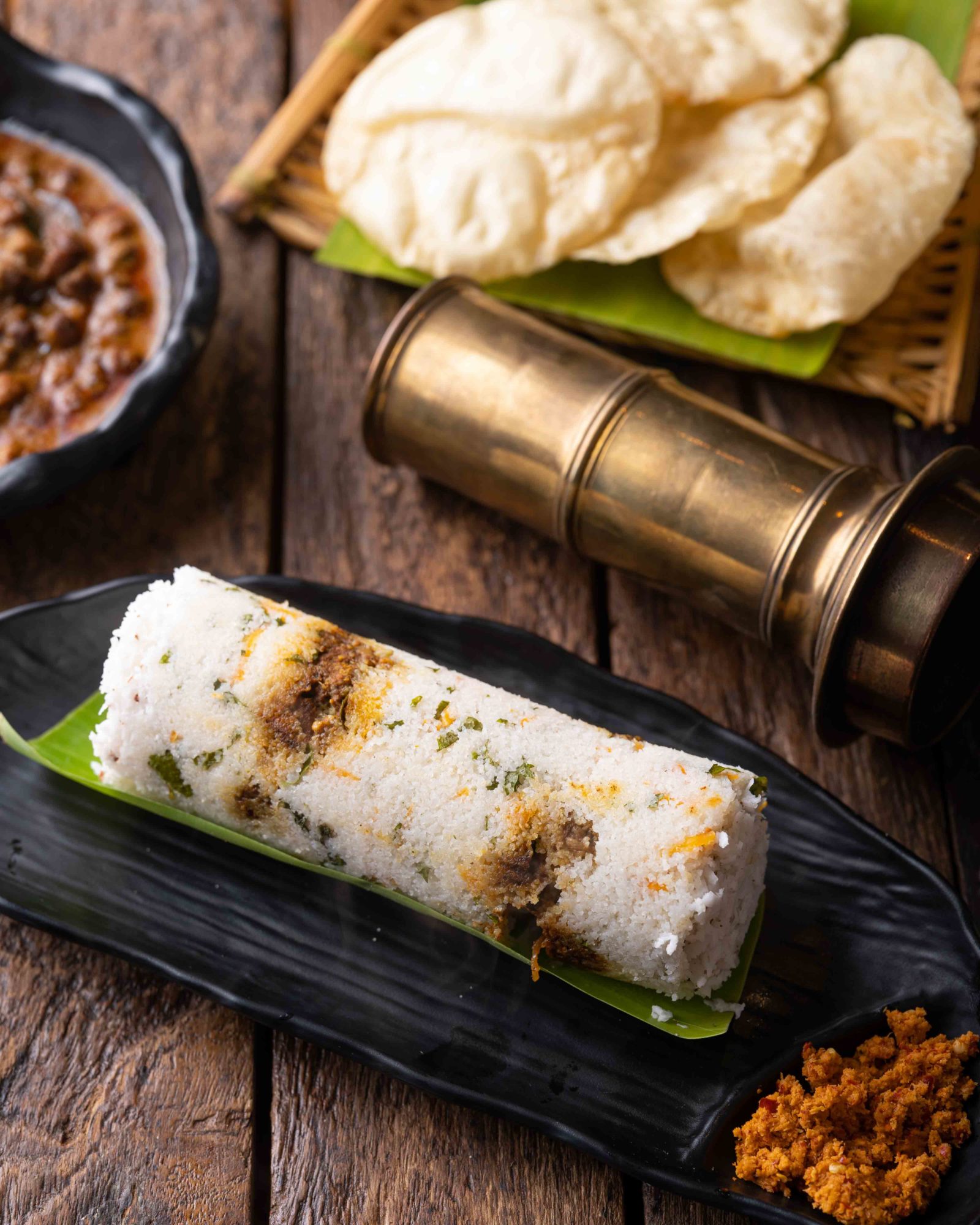 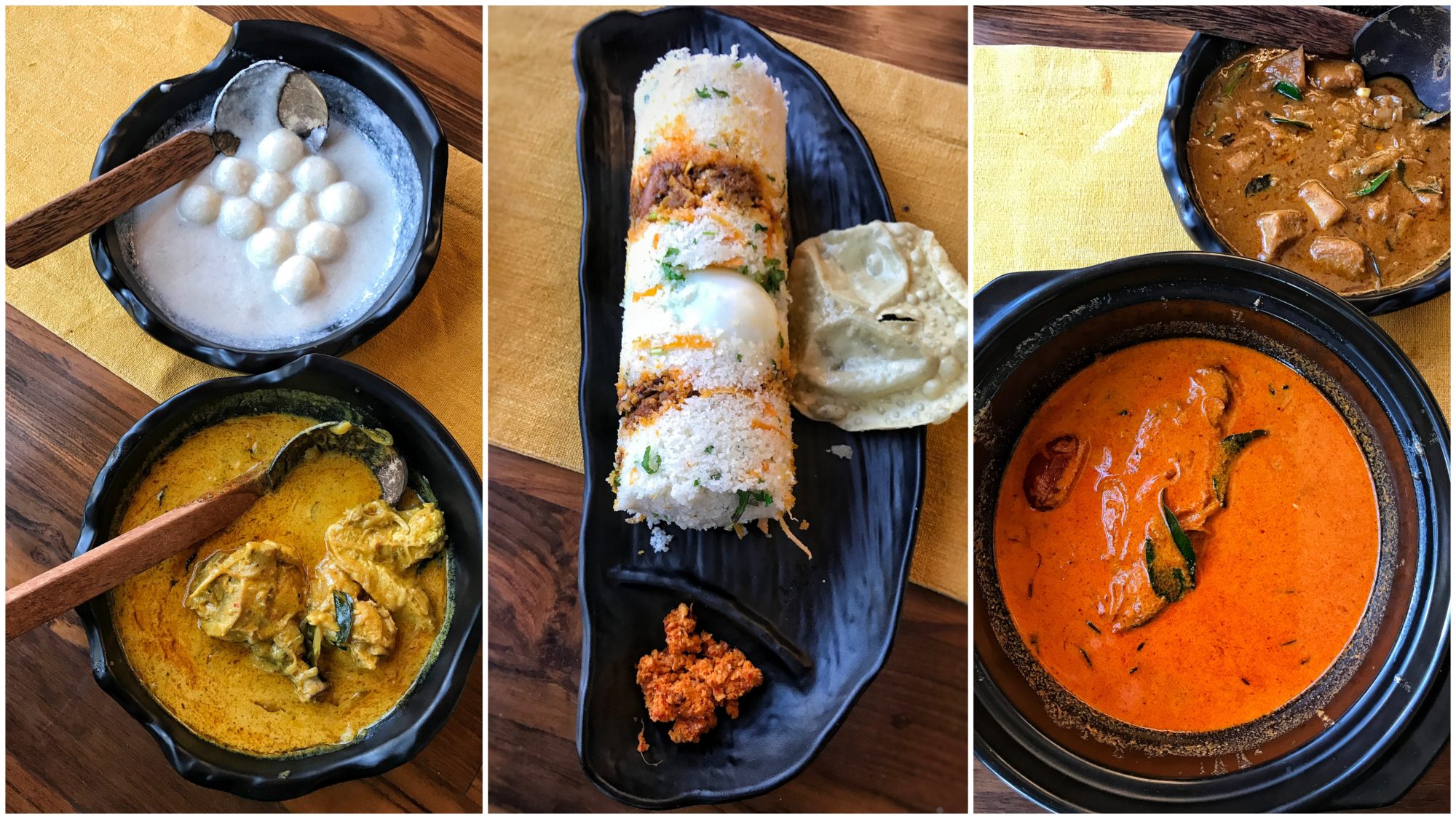 The mutton chaps is delectable, with vattayappam, I have had it in my subsequent visits and strongly recommend! And no meal at KCK should end without Cloud Pudding – beautiful fresh and wiggly goodness of a tender coconut pudding. The seasonal Kol Ice Cream in Grape Vanilla, Alphonso Mango & Lemon Mint Flavours are perfect for kids and grown ups alike! 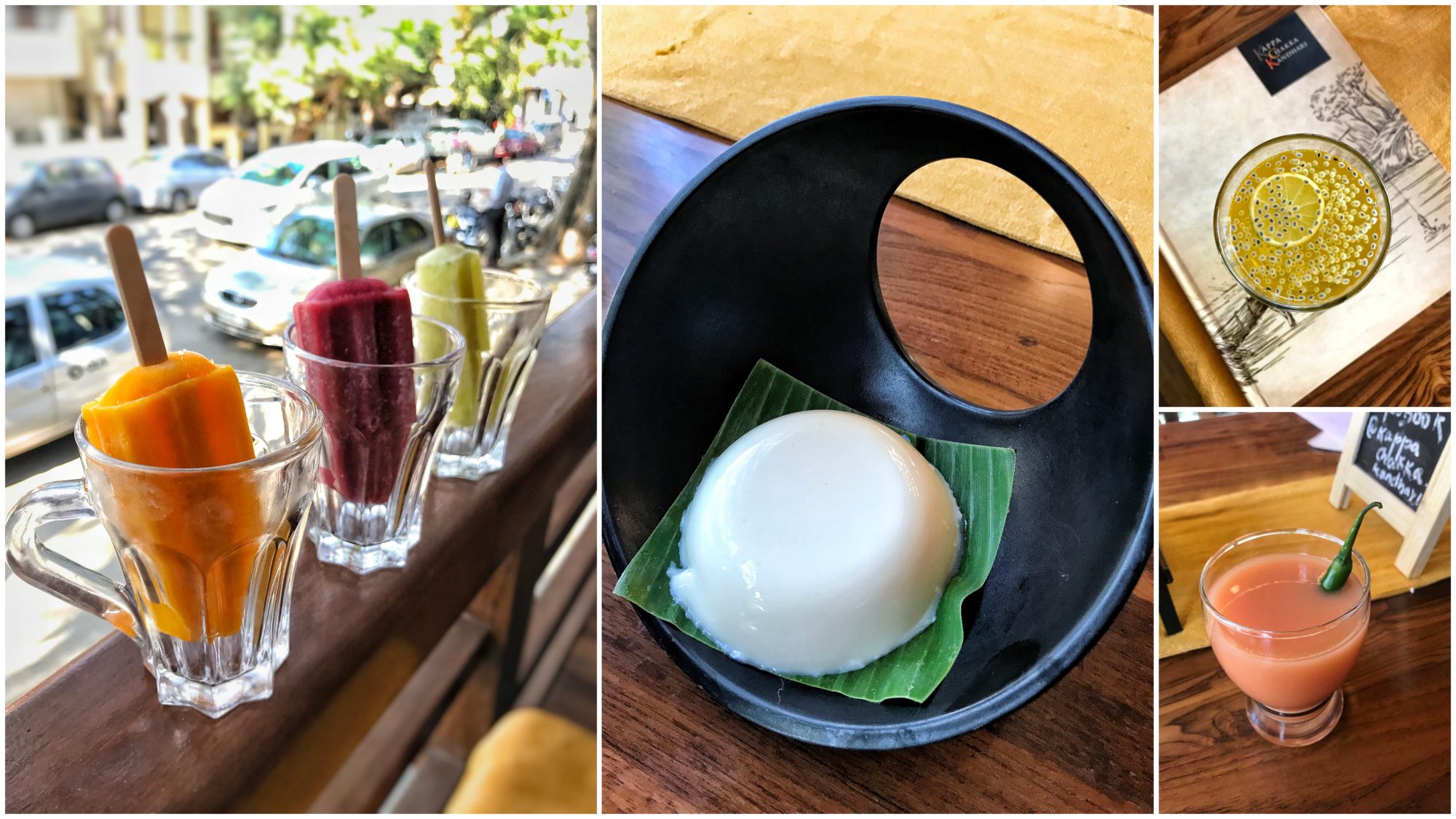 Kappa Chakka Kandhari comes with an already dedicated following. The place itself is casual fine dining with a live kitchen-front featuring cooks, a nice indoor seating and a balcony with some tables setup. The outdoor does get a tad noisy, but still quite enjoyable. And simple elements and décor pieces that are so quintessentially Kerala. Earthenware water decanters, coconut shell ladles and traditional clay chattis that transport you to the lively, rustic shaaps that dot highways all over the state. The small plates in the menu called ‘Touchings‘. If you haven’t visited the place as yet, I strongly recommend a trip there. Try some of the extensive selection of dishes on the menu, all unique to God’s Own Country.

LAPIS – The new All-Day Restaurant at The Oberoi, Bengaluru

Each For Equal – Gender Equality in Workplace

Weekend at Courtyard by Marriott, ORR