Amrut Distilleries held a blind whiskey tasting in The Glass House on Lavelle Road. I was invited by a friend, and on 6th December, we headed to TGH. I was really excited about the event, and on reaching the venue, I realized that I was perhaps, the least prepared. Everyone was ready focusing their DSLRs and getting great shots of the setup. I just had my phone, so this experience has to be just on words. Tsk tsk. 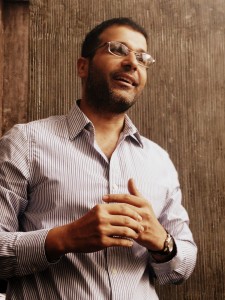 On the second floor, where we initially gathered, there were dozens of tables with tulip shaped wine tasting glasses, organized in a semi circle, ranging from golden yellow to dark amber, and light corn again. The decibel of music initiated a change of venue, and we were ushered down to the private gathering room by the courtyard, where there was barely enough room for everyone to sit. But there we were.

There was a round of introduction for the hosts of the afternoon from Amrut as well as TGH, after which the Amrut team took over the figurative stage.

While I knew of Amrut Single Malt, and had the pleasure of drinking it in the past, the history of the distillery was completely new to me, as well as to most other patrons there. The distillery started around the time of our independence in Karnataka, and their primary audience was the Canteen Stores Department of the armed forces. They started working on single malt in the 80s, but after the founder’s grandson, Rakshit Jagdale went to the United Kingdom, they started exploring the market and continued in this amazing historical journey. Mr.Jagdale spoke a few words, and introduced the whiskey expert Mr. Ashok Chokalingam. Mr.Chokalingam was awarded the Whiskey Ambassador of the Year in 2012 by the Whiskey Magazine. And he was going to be conducting this blind tasting for us. Wow.

Instructions for the tasting.

We had the tasting forms with various parameters listed before us, namely Nose, Taste, Balance, Finish, Age and Origin.

Mr.C explained these to us, and guided the audience on what to notice, how to hone your senses to identify and appreciate the parameters of whiskey. This was a blind tasting, so we did not know which brand, or how old the whiskeys were.

We started off with smelling the aromas in the first glass. It seemed a little strong. And then we had to warm up the glass covering it on the top and base for a good few minutes before nosing it again. And boy, it was stronger and richer in citrus and wild berries. The taste was sweet, smooth, and almost too sweet. I rolled it around my mouth and gently swallowed it. Smooth in the mouth, no burning in the throat, short caramel finish. 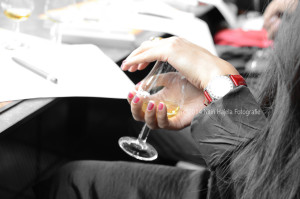 The flavors and complexities of the whiskeys were interesting and overwhelming as we moved along the glasses. One had the smell of bananas, and turned out to taste like vanilla and spice. Another was sweet as liquorice with flavors of bourbon, but in reality made in India! We spoke to factors affecting color, taste, how soft water and peaty water make their differences. Our guide helped us with hints and directions keeping the event fun and informative. No water was allowed, and of course no soft drinks. We consumed several drams in a little over an hour, and though I would have personally liked more time to understand the drinks, huge pangs of hunger struck.

We moved on to the rest of the glasses. We needed to score the drinks as well on those parameters. The exercise took longer than I anticipated. It was almost 4pm as we were totaling our guesses and scores to see how the whiskeys had fared. The crowd highest was Jim Beam, but got the lowest from me! There were three of Amrut whiskeys in the tasting, single malt, fusion blend and peated whiskey, with JW Black Label, Glen Morangie and Jim Beam being the other three whiskeys in the tasting.

In 2010, Jim Murray named the Amrut Fusion single malt whiskey as the third best in the world.

For a full list of whiskeys from Amrut, please visit: http://www.amrutdistilleries.com/

The Big Brewsky – Not so far from the madding crowd