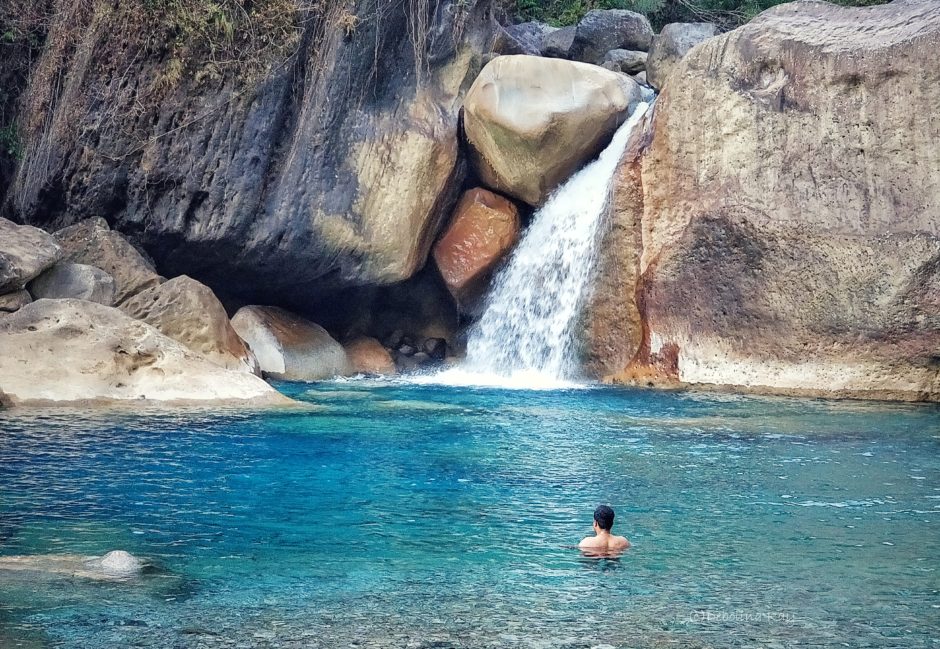 Our trip was a simple plan. Tapash and I were going to Calcutta – mainly to eat Biryani. Yes, I am serious. We thought it would be fun to do a short trip from there. Initially it was going to be Nagaland for the Hornbill, but our holiday plan was making us miss the best artistes, so we looked at the next segment of interest. Arunachal Pradesh. Difficult terrain, unexplored and rugged. And then next pick – a relatively easier one in comparison was Meghalaya. This post is on the second leg of our trip. And that’s Tapash on the cover photo, by the way! 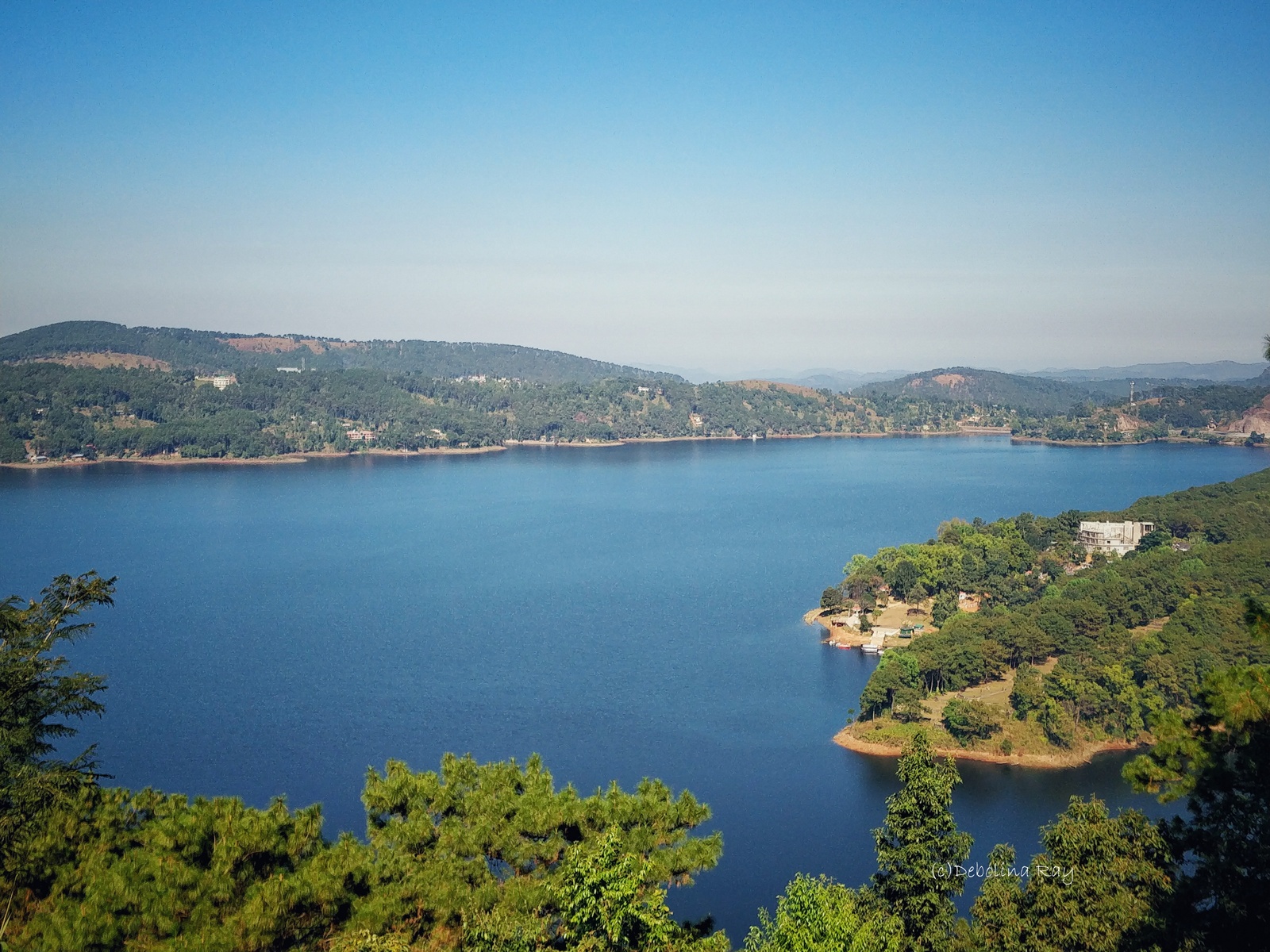 From Guwahati, we set out to Cherrapunji, locally known as Sohra. Cherrapunji is known for the high rainfall that it receives. We were going in winter, so the rains had taken it easy, and winter isn’t too harsh either. The roads are beautiful to drive on – wide, clean and fast moving. The only slow zone we hit was when we were passing Shillong, which was expected. And it was going to be 3 days in Cherrapunji. 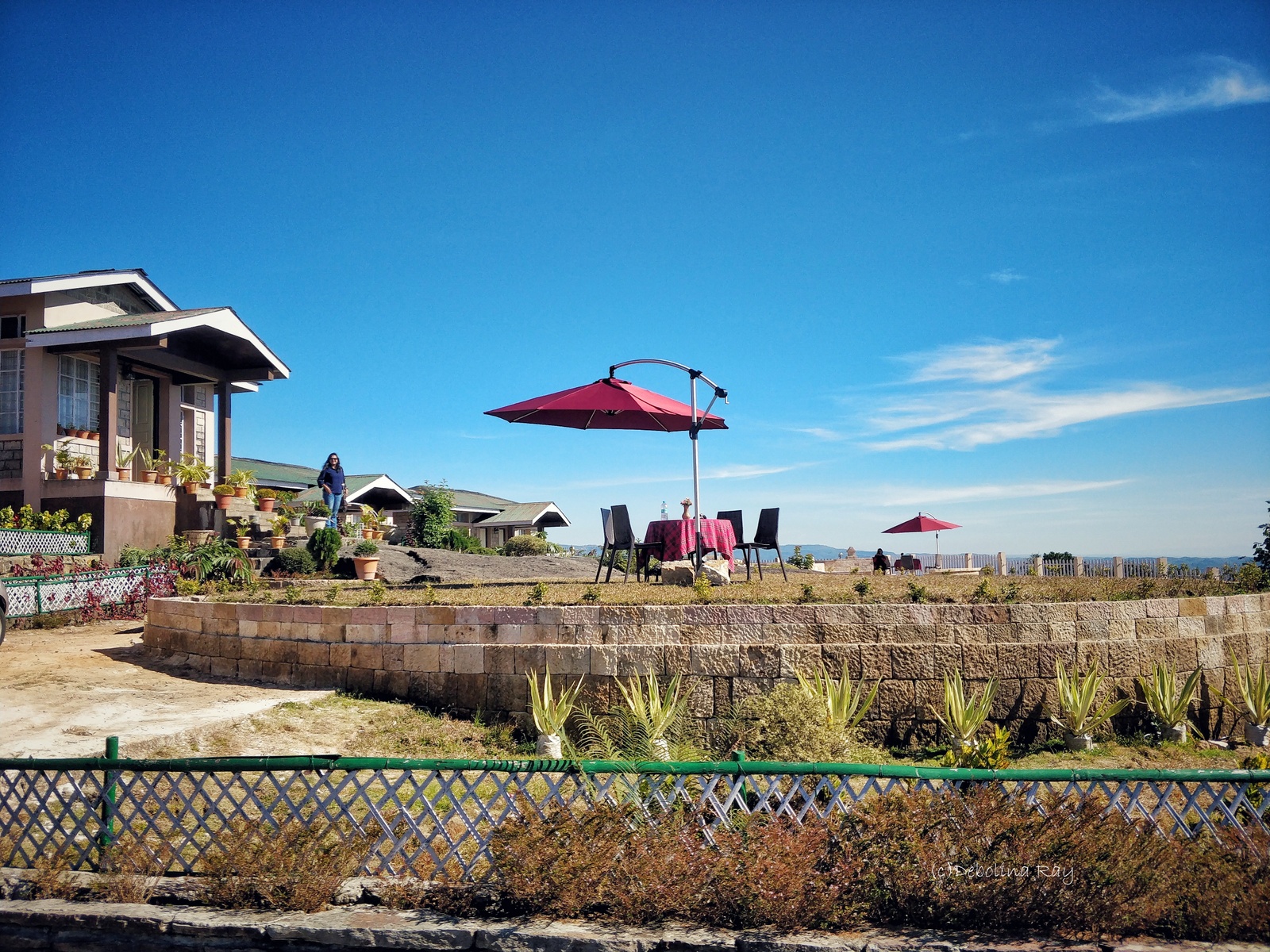 We were staying at Kutmadan Resort – the name loosely translating to end of the land in Khasi language. At night, we traveled way past all home stays and resorts, and what seemed like most of civilization to reach this place. The bright lights of Bangladesh could be seen on the plains, while the resort with its vantage point view perched on the hill. There are a few nearby villages to explore and hike to – but we had lost a couple of days in the initial part of our trip, so we pretty much set out to do what we came for. 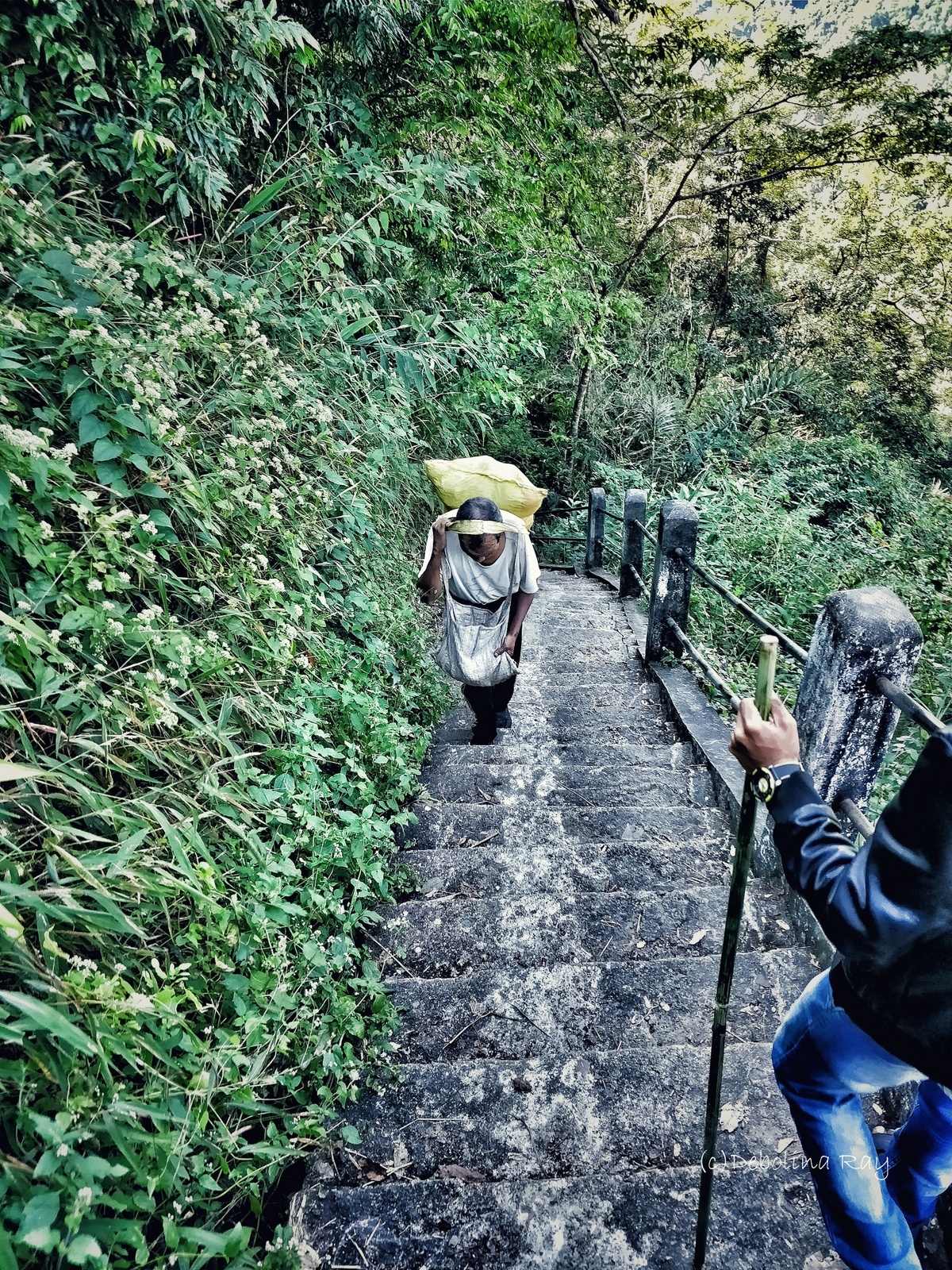 Starting to walk down to Nongriat village 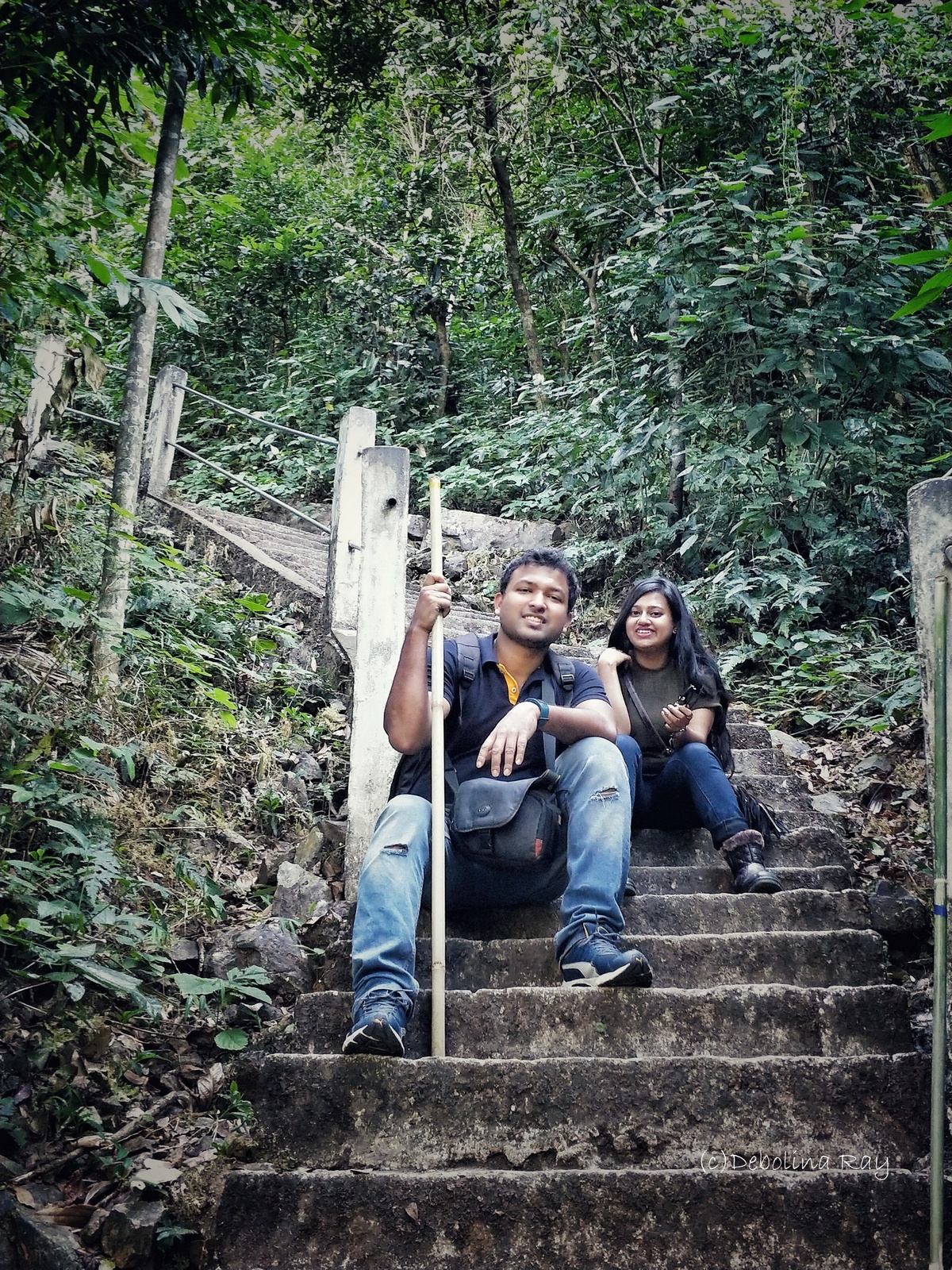 A much needed break, among many such breaks! 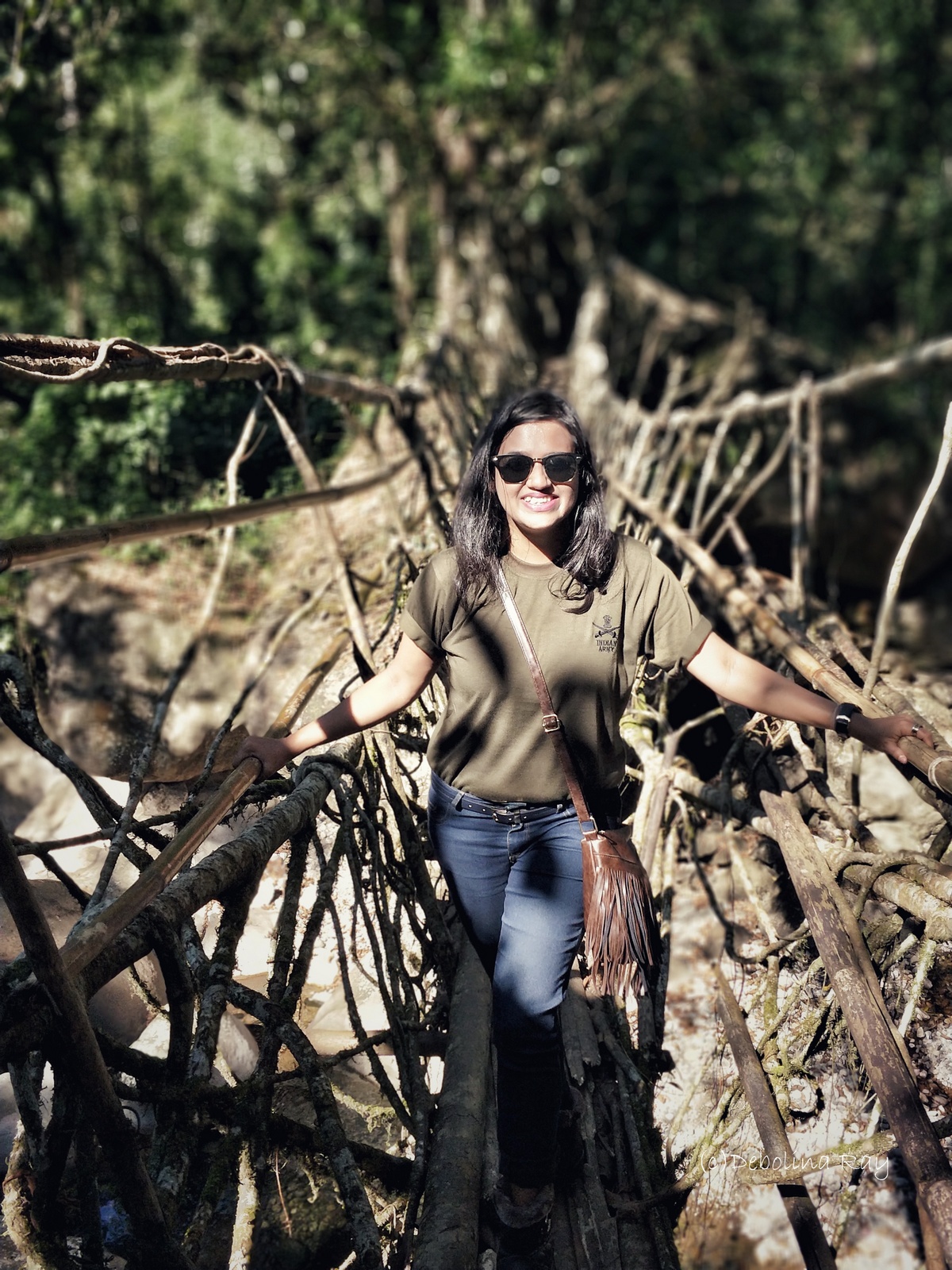 Exploring the Nongriat village was our main intent, that’s a short drive out of Cherrapunji. The village is actually on the Khasi Hills, and is known to outsiders for its living root bridges. And Jingkieng Nongriat or commonly known as Double Decker is the most popular of the bridges. These are actual functional bridges, built by directing roots of trees to span over the rocks and river – creating surprisingly sturdy natural bridges. The hike to the various bridges – living roots, hanging and suspension bridges took about two and half hours. While in winter, we could easily hike past these – in rainy season it wouldn’t be so. Over 3500 stairs in one way would be extra challenging with rains and slippery steps. 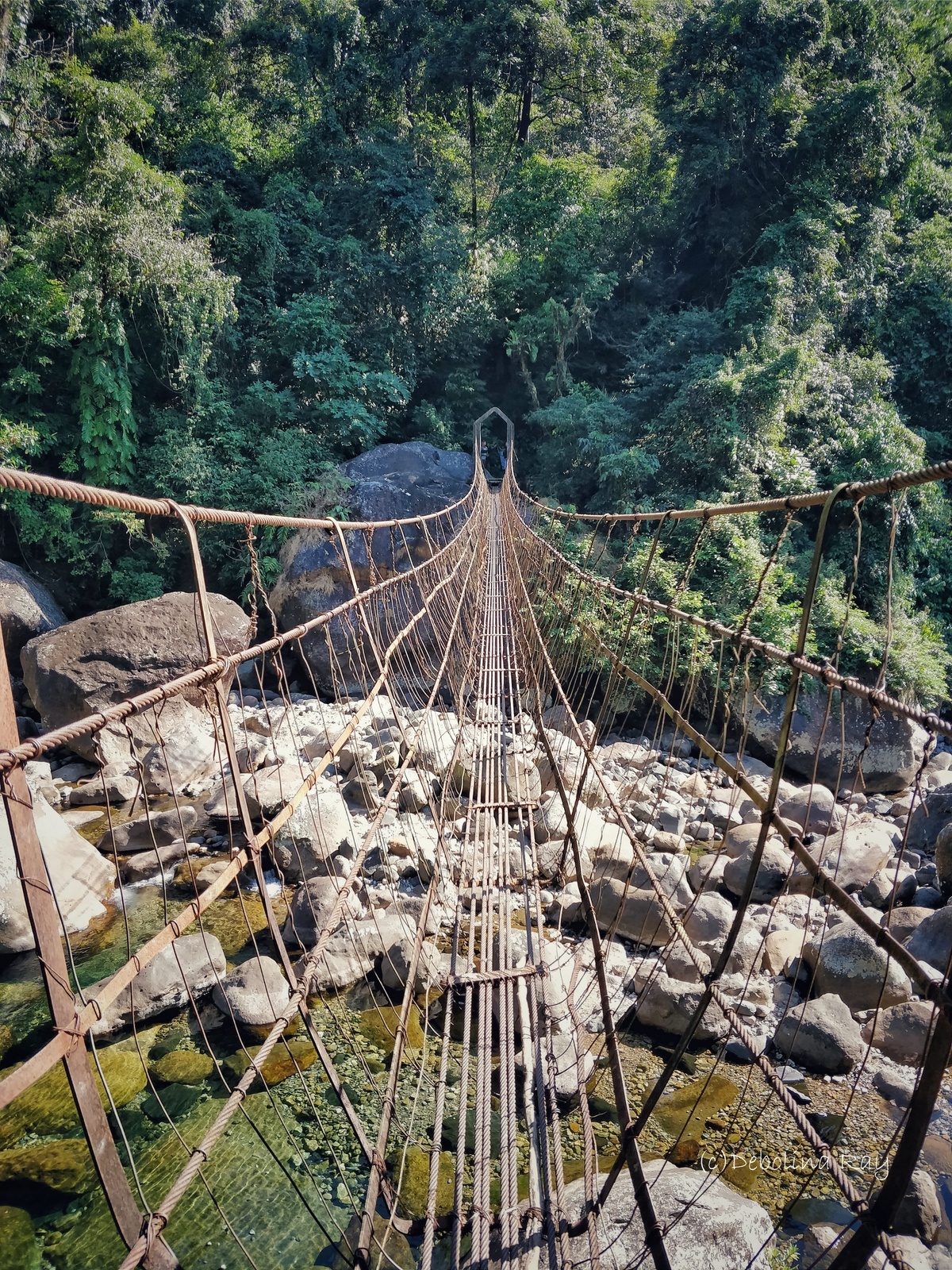 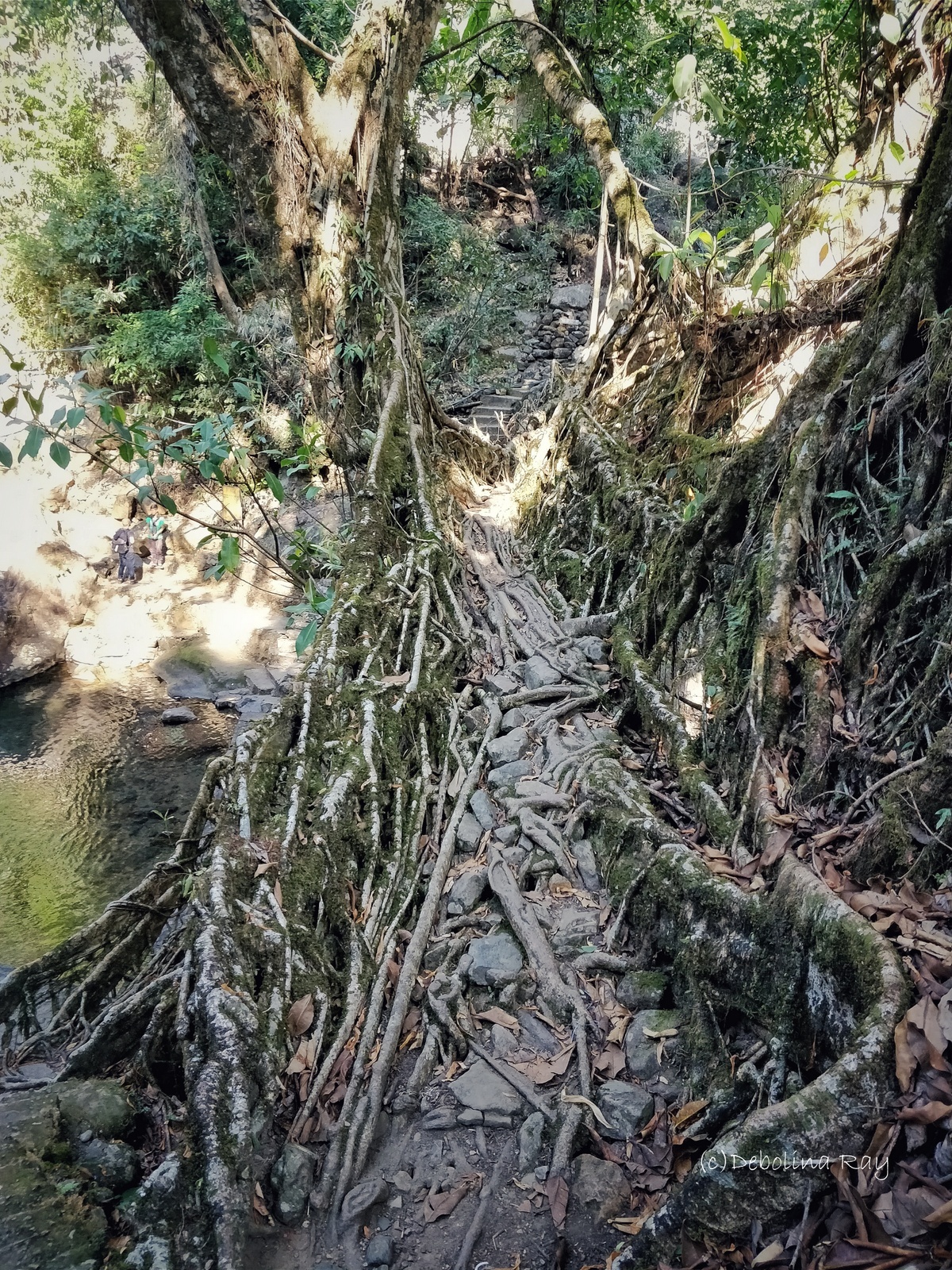 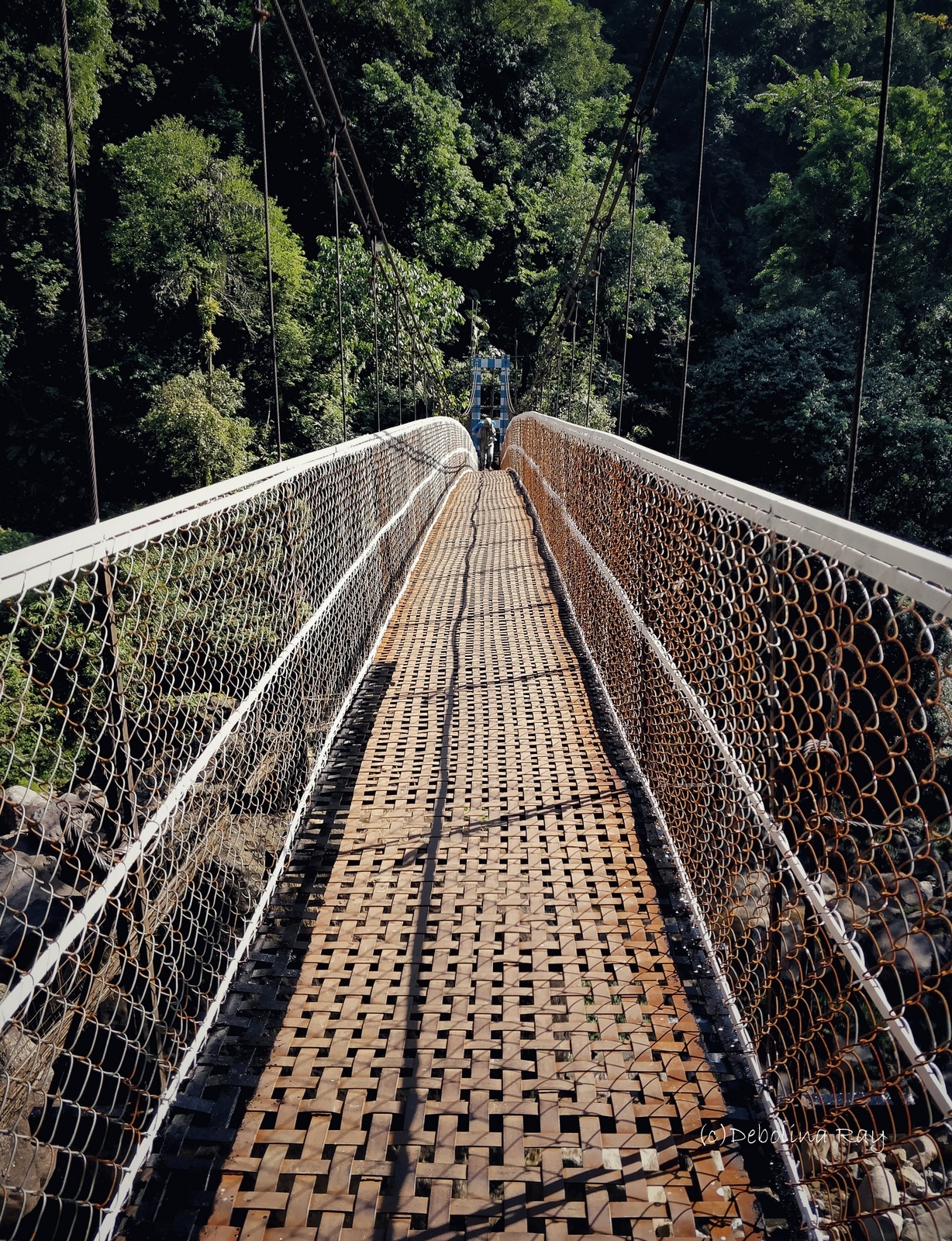 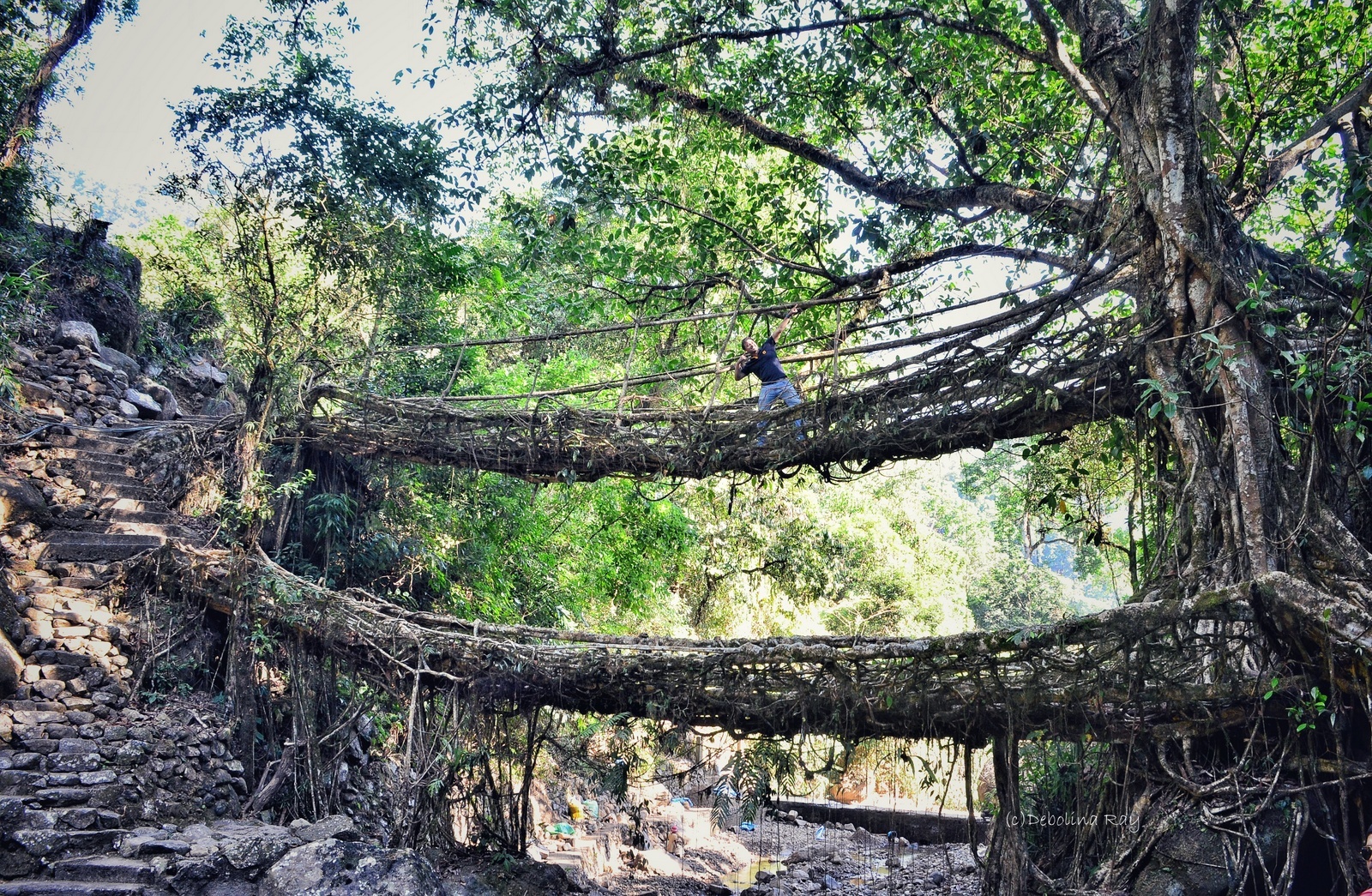 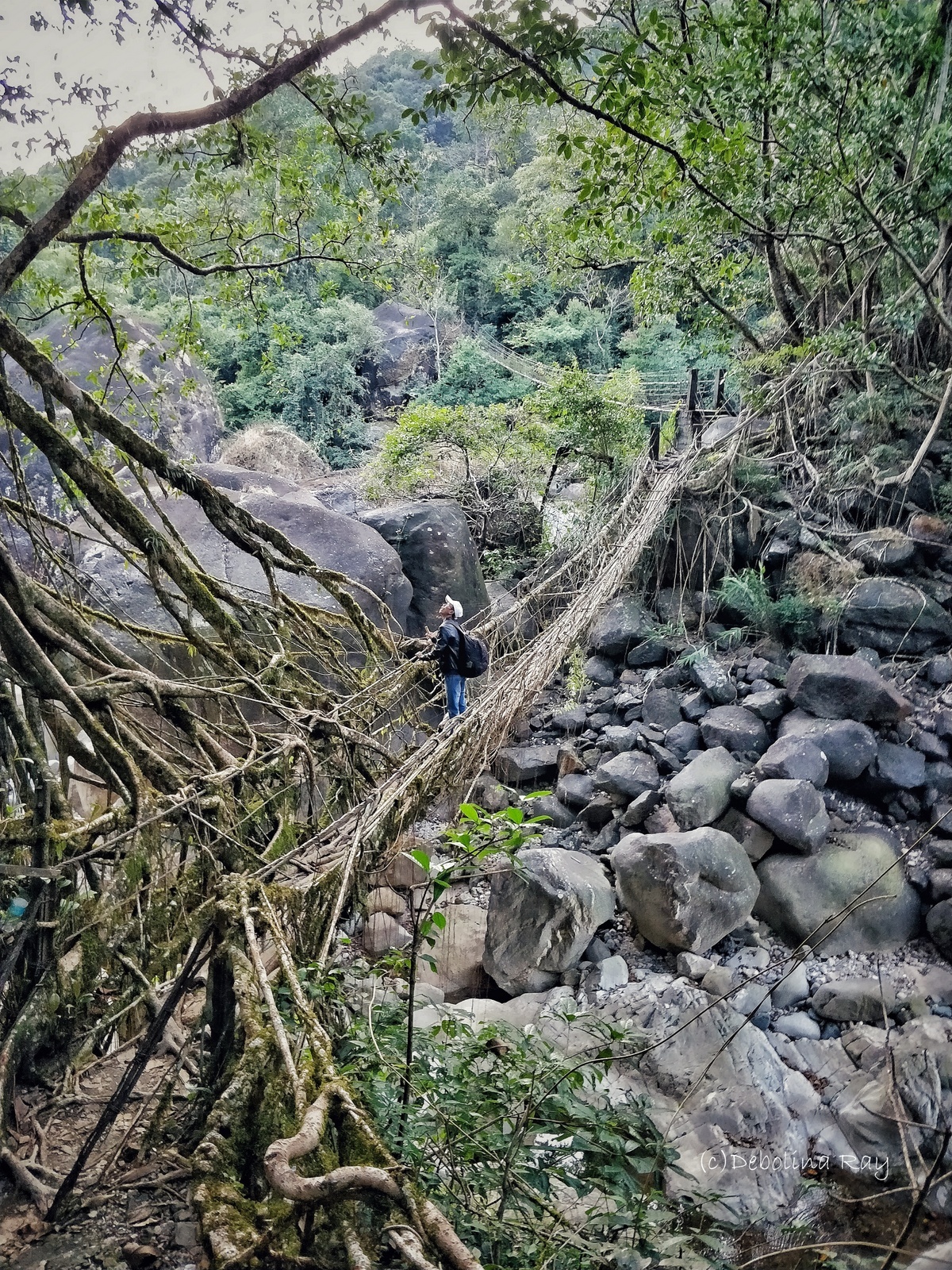 Shnonpdeng and Dawki by the Umngot River

The next day was mainly heading to the Shnonpdeng and Dawki village and spending time at the Umngot River. This village actually has the India Bangladesh border at about 7 km away – with Silhet just across. The river is mainly known for its beautiful clear water. You can get a boat to take you around, or do kayaking, ziplining etc. Or just stay over in a tent. 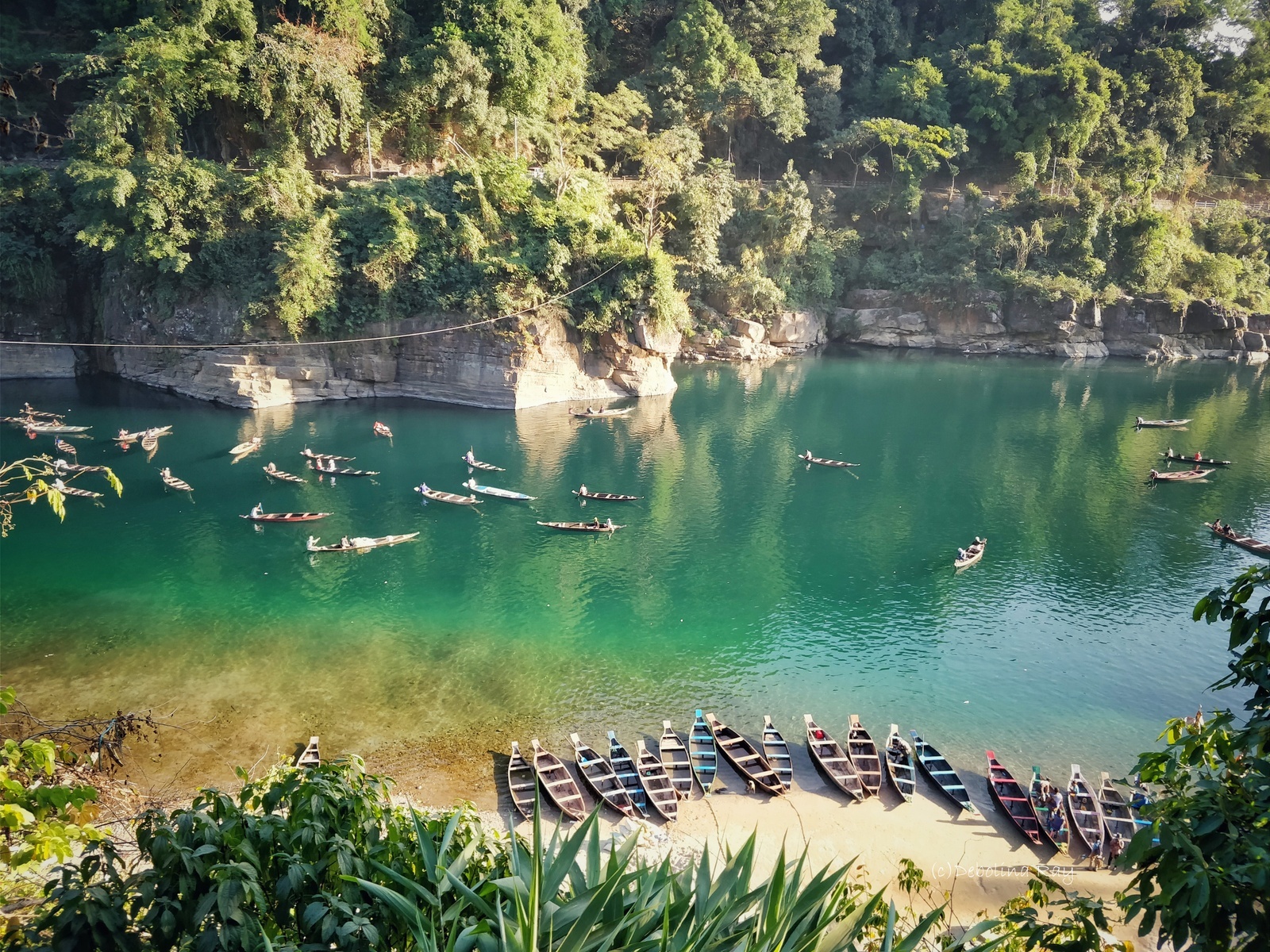 Winter is an off season, so while the water in the river is lesser – so are the tourists. A super chilled out place, and also where we got totally tanned! We took a boat out under the bridge to a small island, where we kayaked – is that the verb for it?! 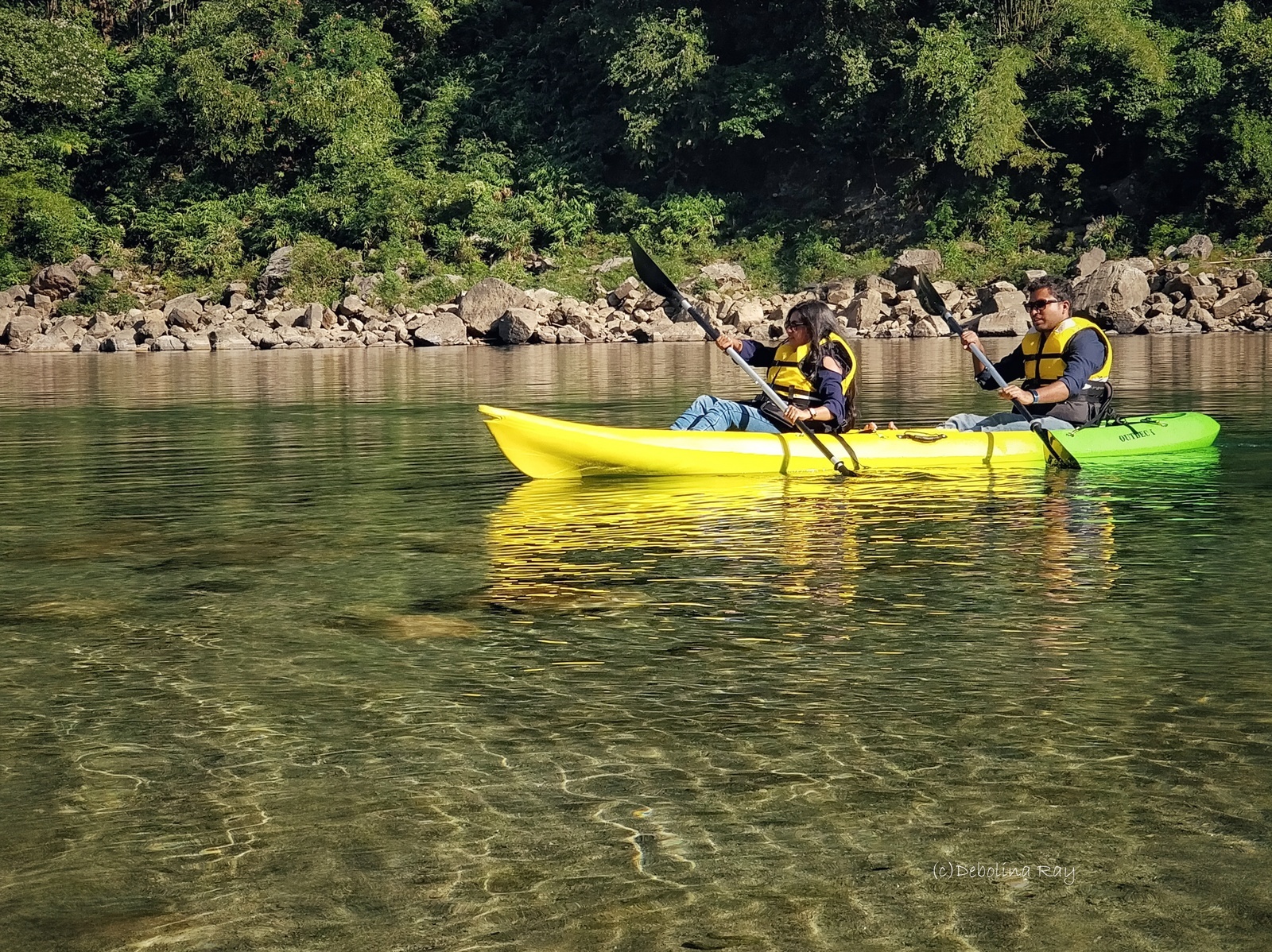 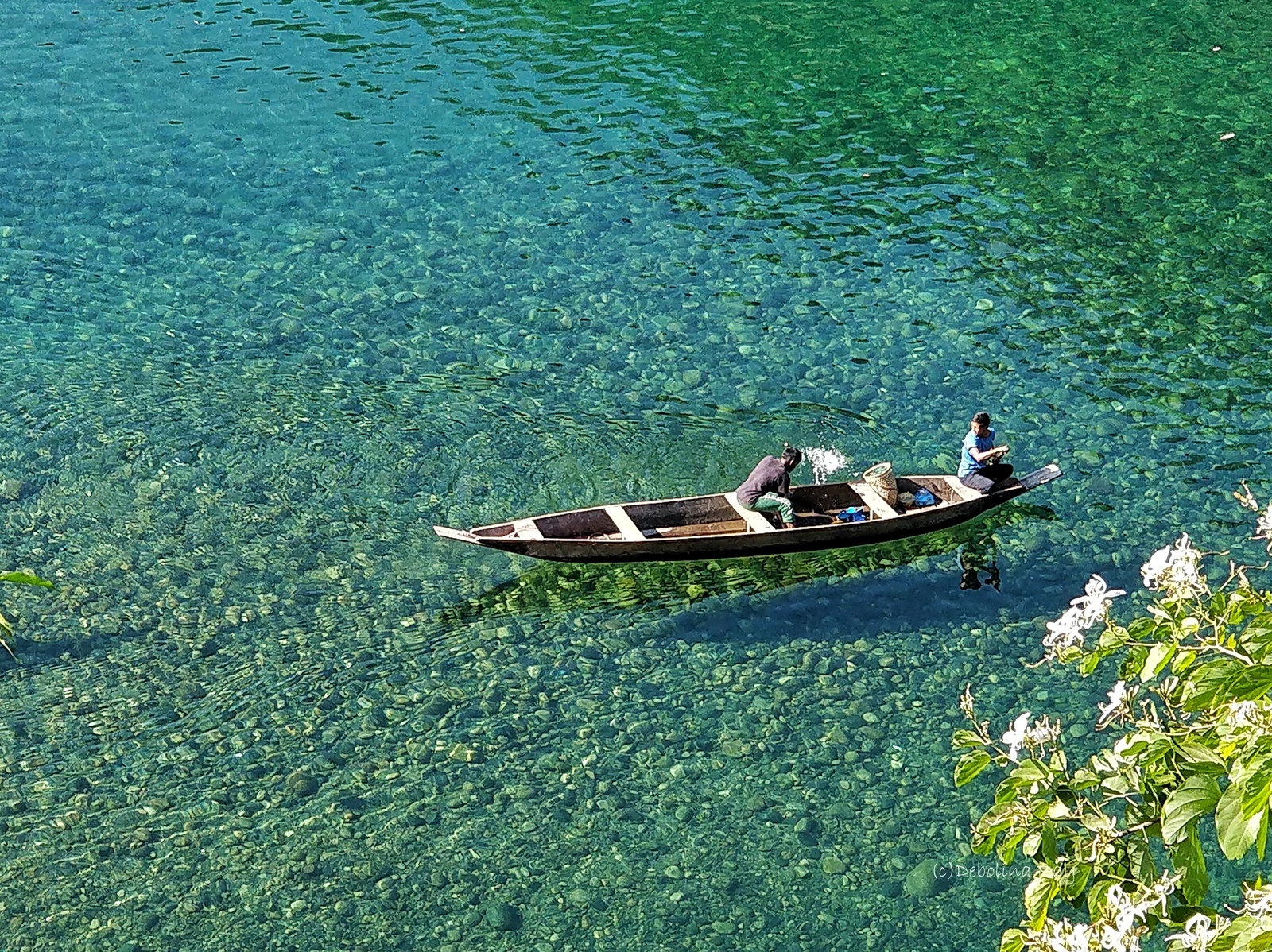 There was a glass like clarity to the water. And we could see the river bed in most of the places. And though it looked shallow, due to the light and water, some parts easily went as deep as 12 feet or more. Our boatman Phrangsngi also sets up people to camp there for the night. We were seriously wishing we had more time! But if you had 3 days in Cherrapunji, these would definitely be our recommendation. And don’t miss out on the delicious Khasi pork, either here or Shillong!

With more time, there’s a lot more to do here. Caves, clean villages and some nice waterfalls. We’re saving some of that for our next trip out. For more details on our trip, stay tuned!

The Fatty Bao Opens in Kolkata – and we love it!