Each For Equal – Gender Equality in Workplace

Each For Equal, International Women's Day 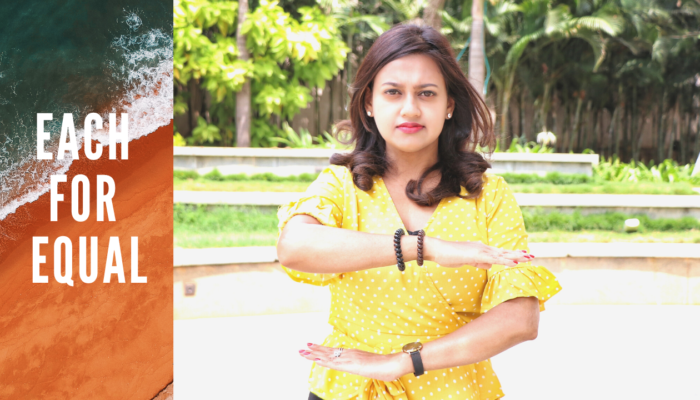 This year’s International Women’s Day campaign theme is #EachforEqual and #GenerationEquality – something I hold very close to my heart. So instead of endorsing one time marketing campaigns, I thought of writing a post – about fighting bias, stereotypes, discrimination; and how we can foster a spirit to celebrate equality – gender equality – and change as well as broaden perceptions. This is something we have been discussing for this last decade, but we are still very far from fruition. An equal world is a balanced and enabled world, for everyone. To set the premise, this is not about female achievement – about which there should no doubt or debate, but to discuss gender equality, analyze biases and to go beyond stereotypes.

In 2015, I heard this amazing speech by Reese Witherspoon, when she was presented with an award for her work creating stronger roles for women in film in Glamour Women of the Year Awards. The entire acceptance speech is powerful and inspiring. One particular bit I can’t ever forget is when she says: “I dread reading scripts that have no women involved in their creation because inevitably I get to that part where the girl turns to the guy, and she says, “What do we do now?!” Do you know any woman in any crisis situation who has absolutely no idea what to do? I mean, don’t they tell people in crisis, even children, ‘If you’re in trouble, talk to a woman.’ It’s ridiculous that a woman wouldn’t know what to do.”

It’s 2020, and I still look around and see and hear things that we had hoped to move past. Male dominated boardrooms, leadership groups with no woman present, bias about women doing certain jobs or performing in some roles. Two misconceptions I want to address at the onset: a) It is not about giving the job to a woman, that’s not the ask or the need. Gender Equality is about giving equal opportunity to people irrespective of their gender. b) It is not only men that need to adopt #EachForEqual – women need to understand and accept this and believe in this. Not all women have been supporting or championing this cause either. Each one of us should be agents of change, not just promote this as a hashtag for one day.

To start with, I wish people wouldn’t push the issue of equality under the carpet or brush it aside as an obviousness. It’s not reality. If there are people in denial, run a quick mental evaluation:

Where do we go from here?

If any of the above holds true, then you know there is inequality. Now that could be due to discrimination or perhaps an unconscious bias. I have heard people make offhand comments about how a man has more responsibility at home or a woman slacks off because she has a had a baby. It was NEVER OK to comment as such, but a decade ago it was generally accepted. But it is NOT OK now, and it is way past the time to get over such biases – considering the multi roles men and women undertake these days. Organizations across the world are taking pledge of commitment to step up gender equality. So, while we appreciate cookie boxes and roses, and nice motivational speeches – I would really like a shot at equality this year. Don’t give women another category to compete in, let’s come together to celebrate our collective individualism.

Kappa Chakka Kandhari – A Slice Of Kerala in Bangalore