Cataratas do Iguaçu – The most breathtaking sight in the world 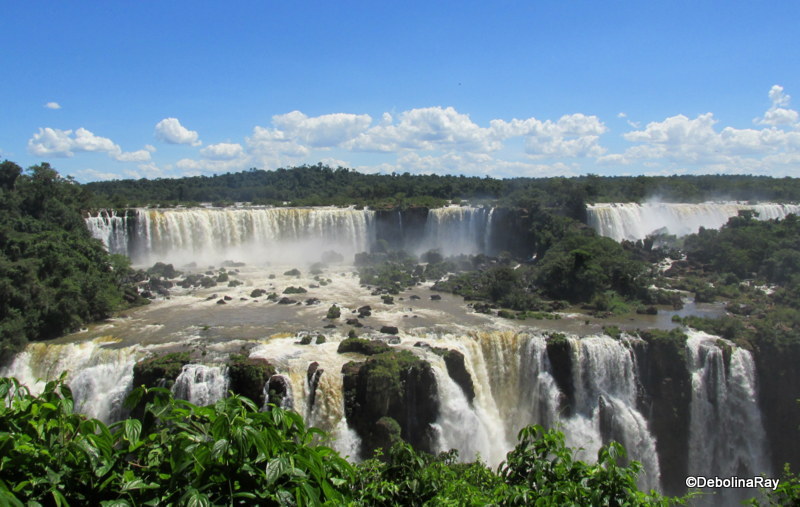 Iguaçu Falls is one of the new 7 wonders of the world, with the longest drop of 82 metres, and a width of almost 3km. During my visit to Sao Paulo, my friends/colleagues were heading to this waterfall, Cataratas (in Portugese), and I was the last minute addition to this plan!  The city of Iguaçu is about 1.5 hours away by flight, and Gol Airlines isn’t known for its efficiency! The flight was delayed by 2 hours, and we reached around 2pm. We landed in an airport (Foz do Iguaçu) that had about 2 planes and the clearest blue sky ever. The scattered white clouds seemed to be an afterthought. We got out and took a cab directly to the Iguaçu National Park, which is a UNESCO World Heritage Sites, that’s about a 5-10 minute drive from the airport. In the National Park there are various things to do, like just walk down to the view the waterfall, and see the Devil’s Throat, which is this U-shaped area where the falls concentrate into. There’s also a safari and a boat ride which you could take, that takes you underneath the waterfall, the Macucu Safari. We wanted to do everything!

This waterfall originates in a city called Curitiba in Brazil, and ends up as the waterfall in the border of Brazil and Argentina, thus both country shares gorgeous views of the falls and have the forest running through both the countries!  A bus dropped us off at the starting point of the walk. The hike to the waterfall wasn’t long, but it was a really hot and sunny day, making it seem longer and slower. There were various beautiful view points along that walk, and a few wild animals could be spotted around. It wasn’t very crowded that weekend, but enough people nevertheless. It took us about an hour to hike down till the bridge, when you’re actually standing in front of the vast expanse of the canyon, which is an amazing sight. We were surrounded by the waterfalls from almost 250 degrees! There was the Devil’s Throat on the left, the curtain of the falls, the river and land in the sides. They were selling raincoats in case you didn’t want to get wet, but hell, what’s the point of that! We went along the bridge getting drenched by the splash and splurge of the fan and the whitewater to stand at the extreme end point, where you can barely see the plunge pool due to the heavy mist. You can only hear the loud gushes of water rushing down the crest and plunging below. And it was pure exhilaration to stand there – an indescribable joy.

In retrospect, I would have probably enjoyed standing there longer. We did have our safari to get to, so we quickly hiked back to get a bus and made our way to the second stop in the National Park. The Macucu Safari is a separate and optional offering. It’s priced at 60 USD for the safari, on top of the entry to the park which is 15 USD. The safari included a 3km ride through the forest, a short trek, and then we landed up in the area from where we got into a midsized speed boat, and our journey started on the Iguaçu River. We had to keep all our belongings in lockers, even slippers. Journeys are often said to be more beautiful than the destination. Clichéd, but in this case, I honestly don’t have a pick. As our boat sped past the amazing scenery, too beautiful to be captured by words, onto the falls where there were rainbows formed out of the water, mist and sunlight; the boat paused here, and I took in this moment, feeling the calm and the beauty surrounding me.

Then revving the engines, we sped to the falls itself. As we entered underneath the curtain, I could only hear shouts from passengers on the boat, and the sound of the water rushing by in profusion, as I gripped on to the seats of the boat, getting completely drenched under the exuberant force of the cataracts. We came out into the sunlight, a brief respite, before going back under. The sheer force of the water falling into the boat seemed to make the crew struggle to keep control of the raft. Of course they had done this hundreds of times. The ride lasted about 30 minutes, but for everyone, it was over way too soon.

As we returned to the port, the feeling of being overwhelmed by the sheer force of nature was a humbling yet exhilarating feeling. Yes the time in the boat was too short; yes the waterfall didn’t look as neat and grand as the Niagara. But the few minutes under the falls, amidst rainbows and the deafening sound of the water, the moments in front of this spectacle, all of this etched Iguaçu in my heart forever.