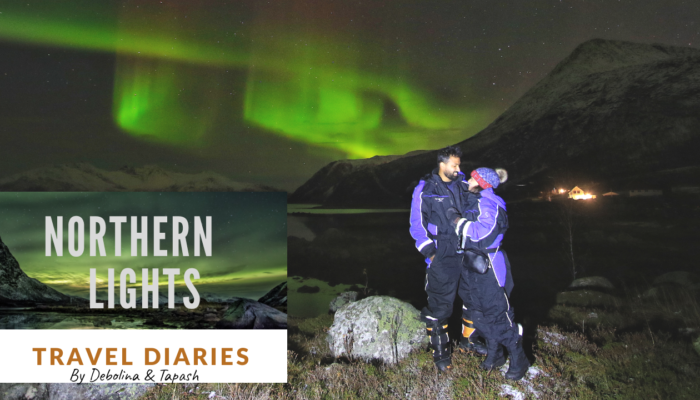 Nature’s own light show is one of the most spectacular phenomena in the world. It’s unpredictable and beautiful, and usually has a chase involved to actually spot this in the right conditions. The Northern Lights or Aurora Borealis are seen as a result of charged solar particles striking the Earth’s atmosphere and magnetic field. This happens mainly near the North and South Poles, where the magnetic field is the strongest – and the colors we see are signatures of gases at different altitudes. This is seasonal, and places in certain countries like Sweden, Norway, Canada, Iceland, USA are perfect for spotting the glorious aurora. Technological advancements available through apps and websites bring your chance of viewing the lights to near perfect. As a thumb rule, it’s the cold, dark nights with clear skies that are ideal. 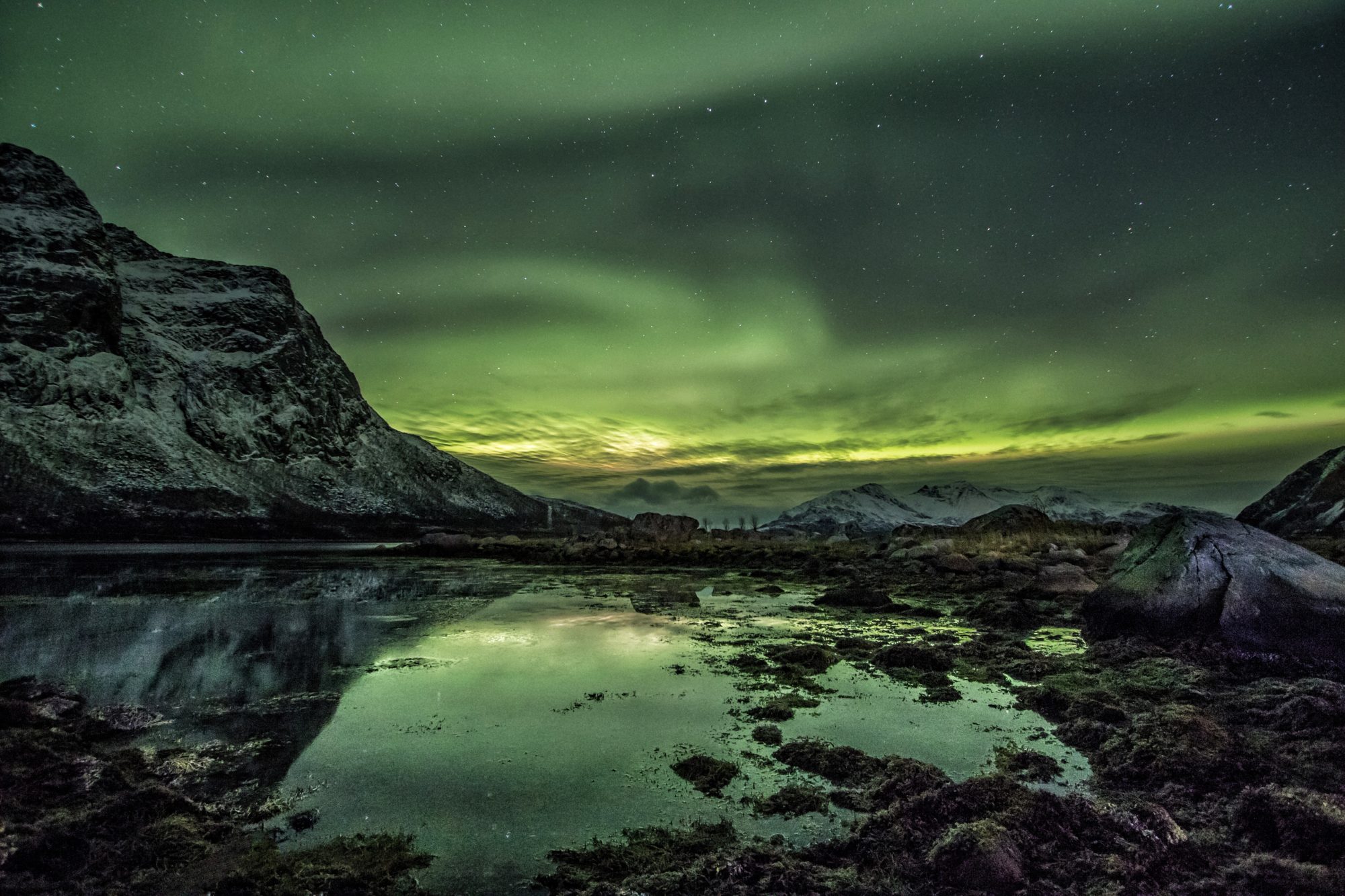 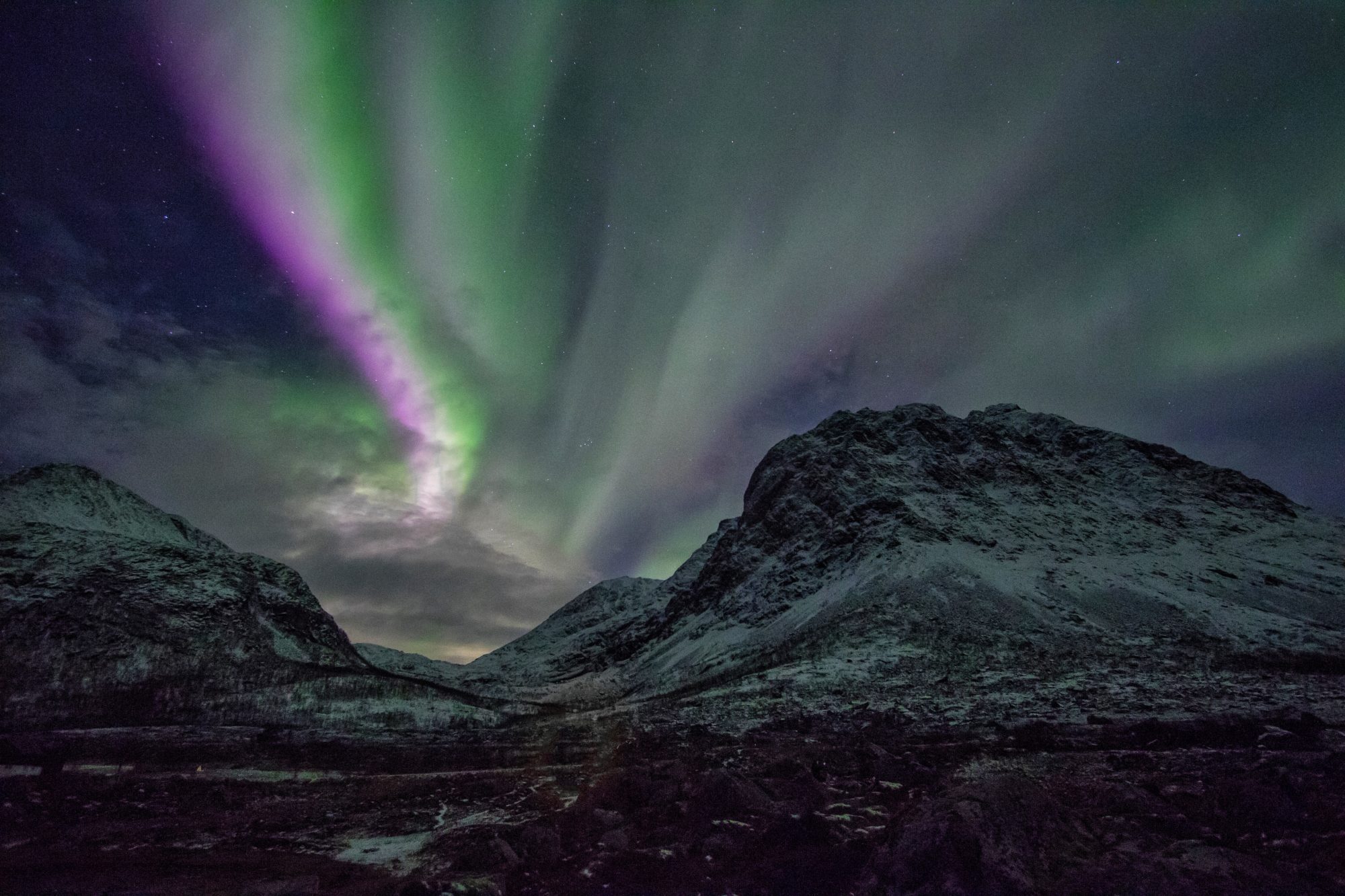 I first saw the Northern Lights two years ago in Tromsø, which is the northernmost part of Norway. It was in March; the days were long. I reached out to many tourist companies, but most had stopped their chases. Luckily, I found http://greenfoxguiding.no/ who were doing a last chase for the season. We left around 8 pm, and it was still bright and white from the snow, and drove for close to 2 hours, near the Finnish borders. And set up camp near a beach. I had a night to see the lights, as I was flying back to Oslo the next day. Let’s just say I got really lucky. 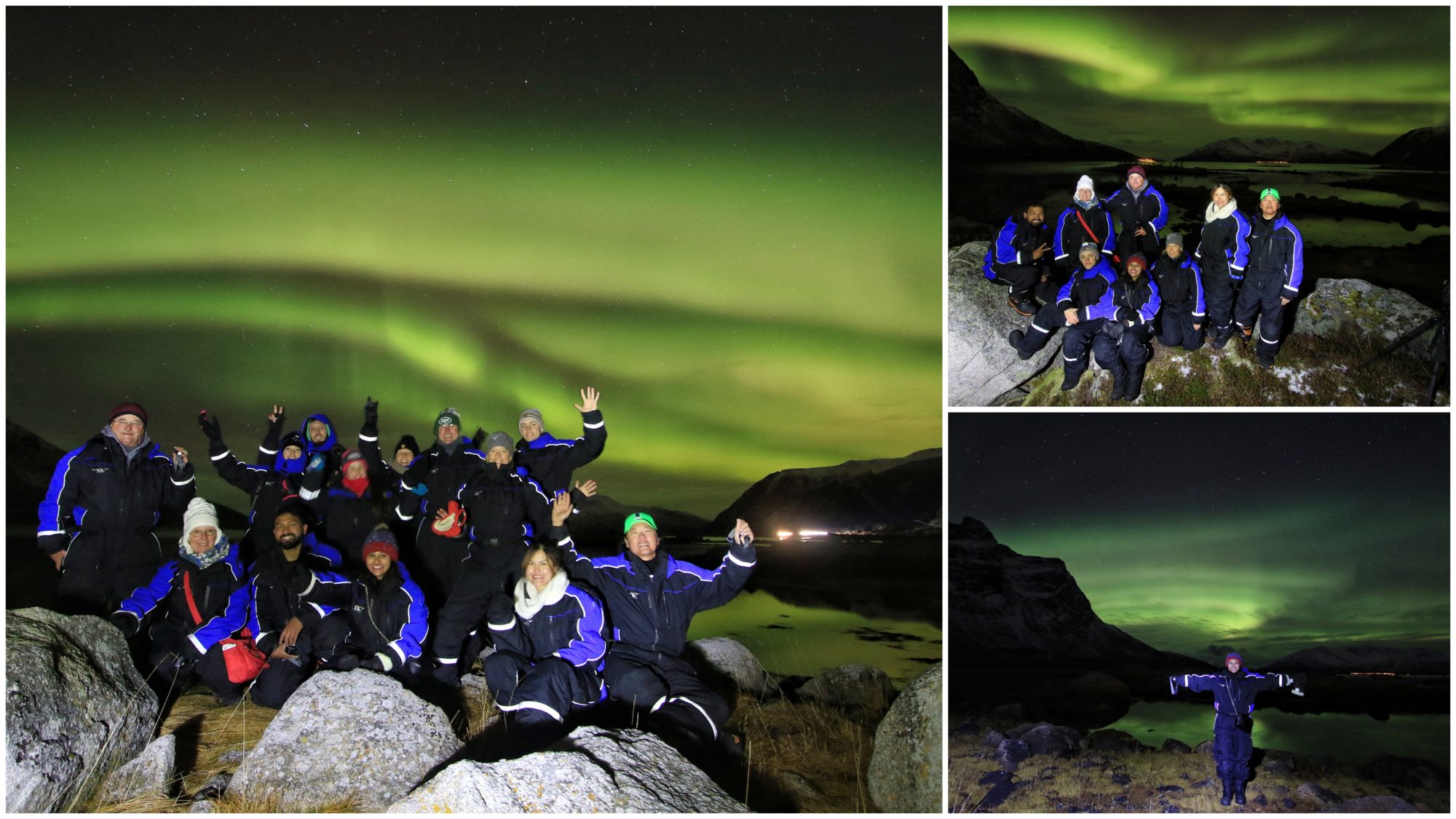 2 years later when Tapash and I planned this, it was easier in some aspects and harder in others. The official ‘season’ for the lights start in September and go on until March. October was the end of autumn, so it hadn’t started to snow properly. The chances of seeing the Aurora were good in theory, but recent reviews on Trip Advisor had quite a lot of disappointed people. I was worried and apprehensive. So, we booked our tickets from Oslo to Tromsø, and I ensured we had 2 nights, just in case.

For those of us who barely get to see stars in the night sky, the lights would be the most beautiful surprise. In a very dark night, as it was 2 years ago, the lights appeared, and suddenly everything seemed illuminated. The colors were stunning, and it was nature’s own coordinated light show. After they appeared, I remember seeing the dance of the lights – which I always thought was really rare. And no amount of literature and scientific study explaining solar storms and gas molecules in the magnetic field could prepare me for this motion and movement of the lights – coordinated to a silent symphony. Usually, the sky lights up in green, but this time we did see a bit of reds and purple in the sky, again – quite rare! 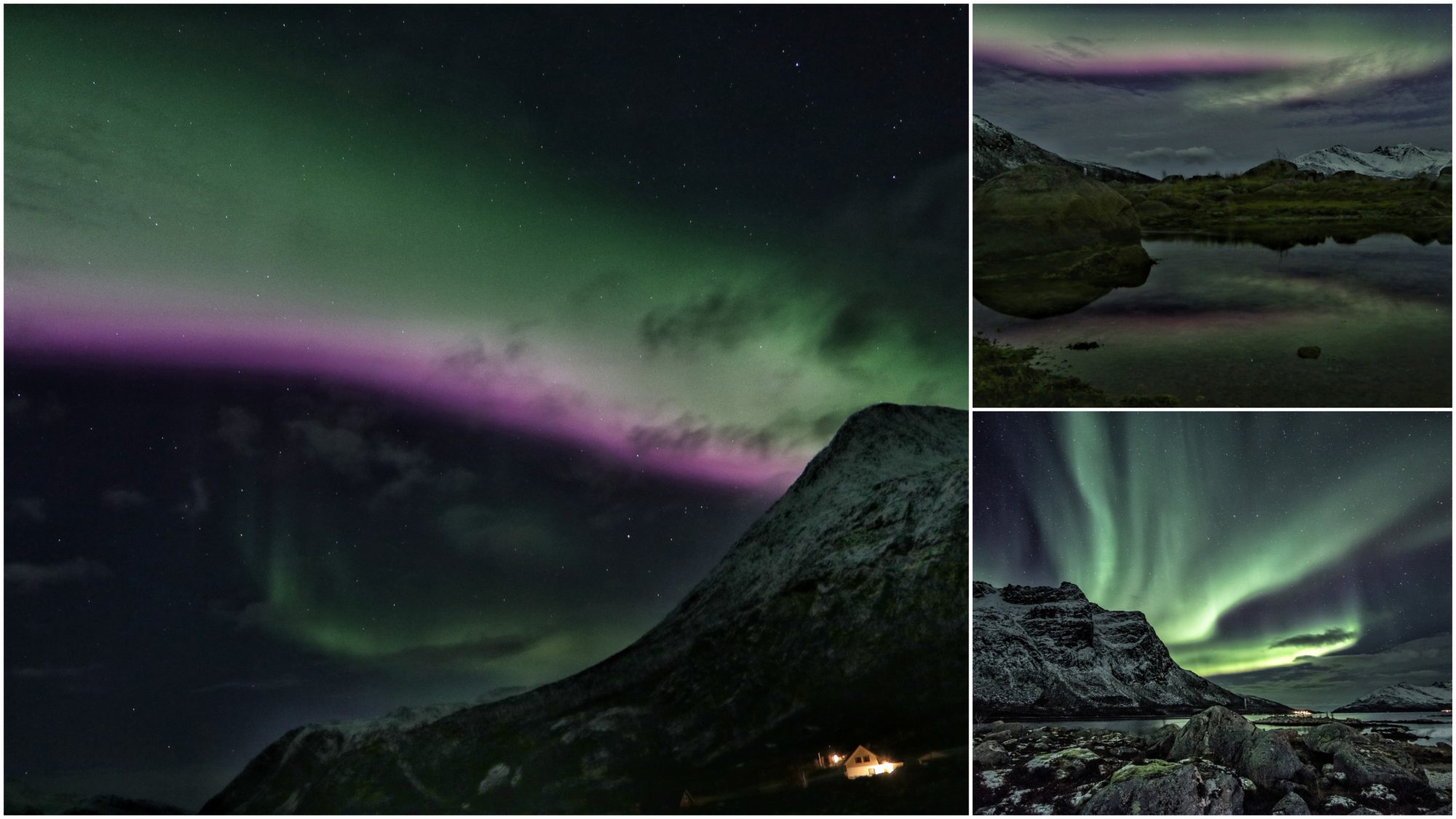 Colours of the Aurora Borealis!

Tromsø has hundreds of tour operators. They offer packages of 2- or 3-night chase, increasing your chances of spotting the lights. You could also take a self-drive car, and camp out. We opted for a one night first, and then were going to wing it. We flew Norwegian from Oslo to Tromsø and headed to the town. It was dark by 4 pm, so it made sense for the chase to start early. This time we had booked https://arcticholidays.org/ – the group met at our hotel at 6 pm. We headed to the warehouse to get suited up. Yes, literally, because we got winter boots, thermal suits, head torches, and mittens. As we came out, someone exclaimed, “The lights!” Yes, the lights were already visible! Then, we sat in a minibus and quickly made way out of the city to our camping site.

The cold – Winter is here!

One of the important things to be aware of is the cold. In negative temperatures, cities get very cold, but we don’t spend prolonged time outdoors. Here, we were going to be out in the cold for hours. So, it’s definitely something to be mentally prepared. Our camping spot was a bit of a hike between two hills, and a small water body. It was a big area, we came to one central camp, and then were free to explore the big area.

Our guide Julien was very experienced as was the driver. They ensured we were comfortable and helped when needed. Julien took our photos, helped set up cameras for folks that needed it, recommended angles and shared experiences. These are cold, dark nights, so it’s important to keep the morale and enthusiasm high. We didn’t have to wait much for the lights, they were kind. It was Diwali that day – perfect to witness this cosmic phenomenon. 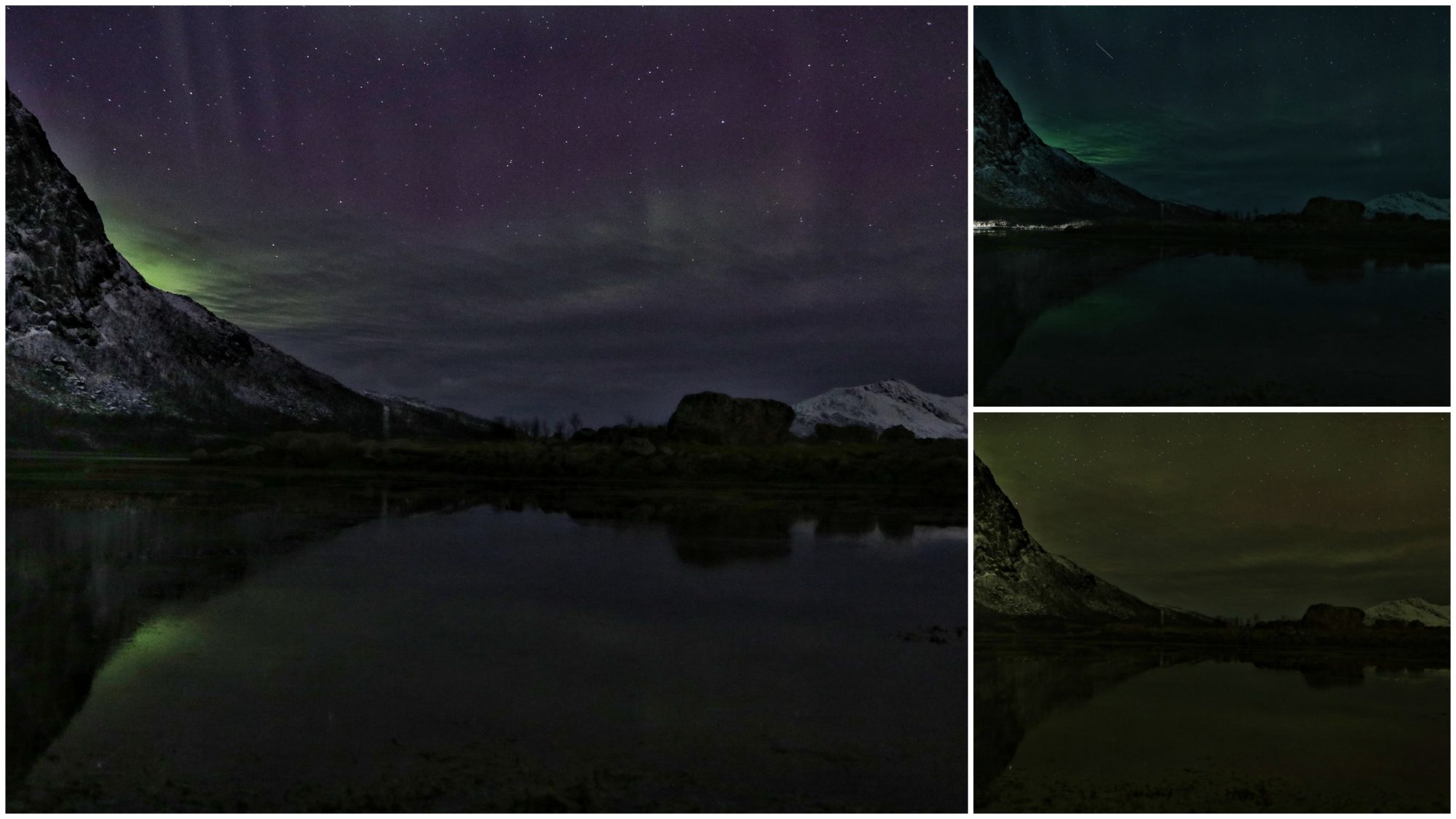 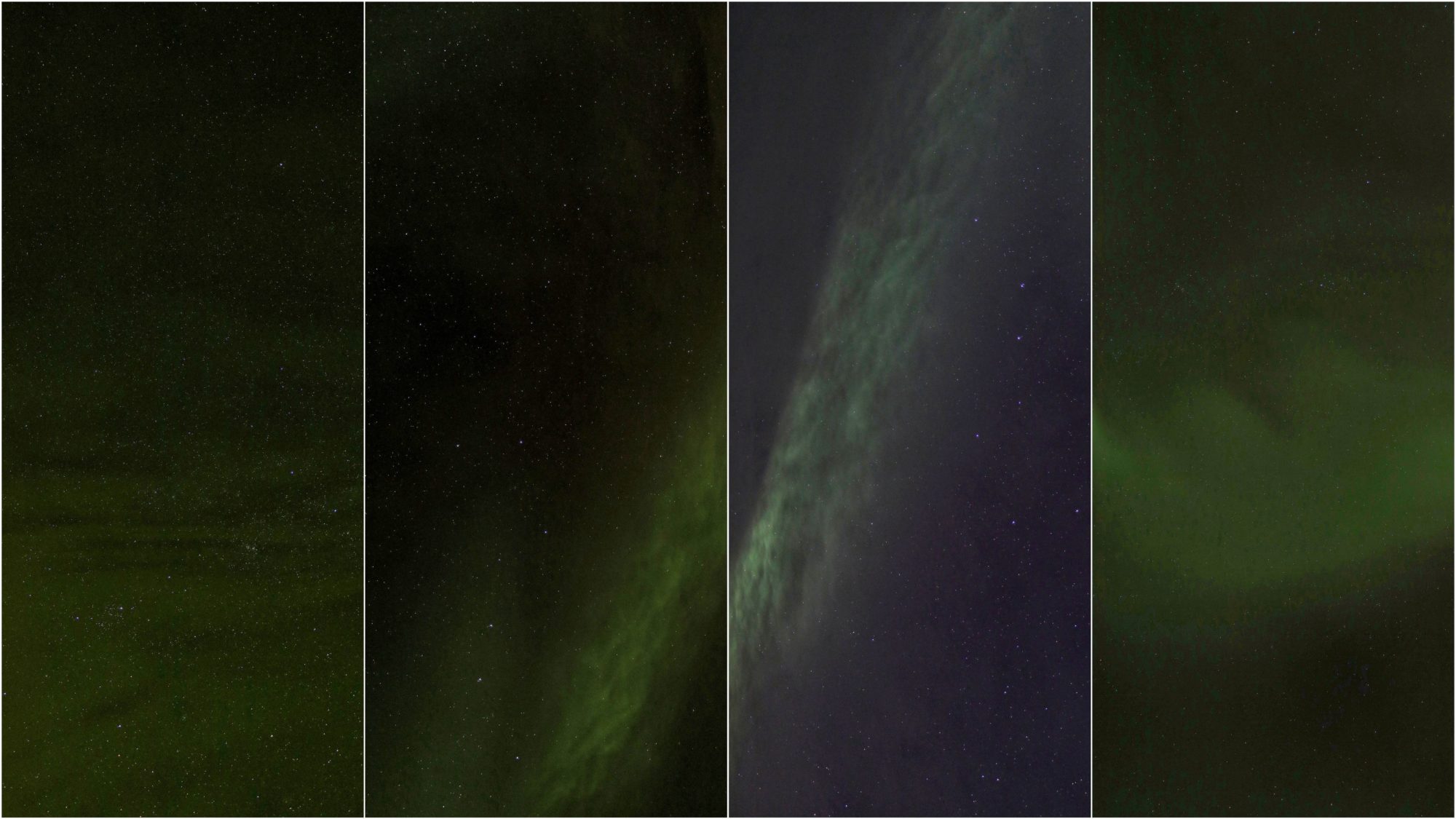 At the Camp Site

Most tour companies organize for snacks and food for the night. The first time it was just the basics. We grilled our hot dogs, put them in potato breads and ate them along with some delicious hot chocolates. This time around, the food was more elaborate. We had a lot of choices, most of us opted for salmon pasta. These were packed food which we poured hot water into to prep, and they were super filling. It is the food consumed by mountaineers and expeditioners. There was hot chocolate and marsh mellows as well. 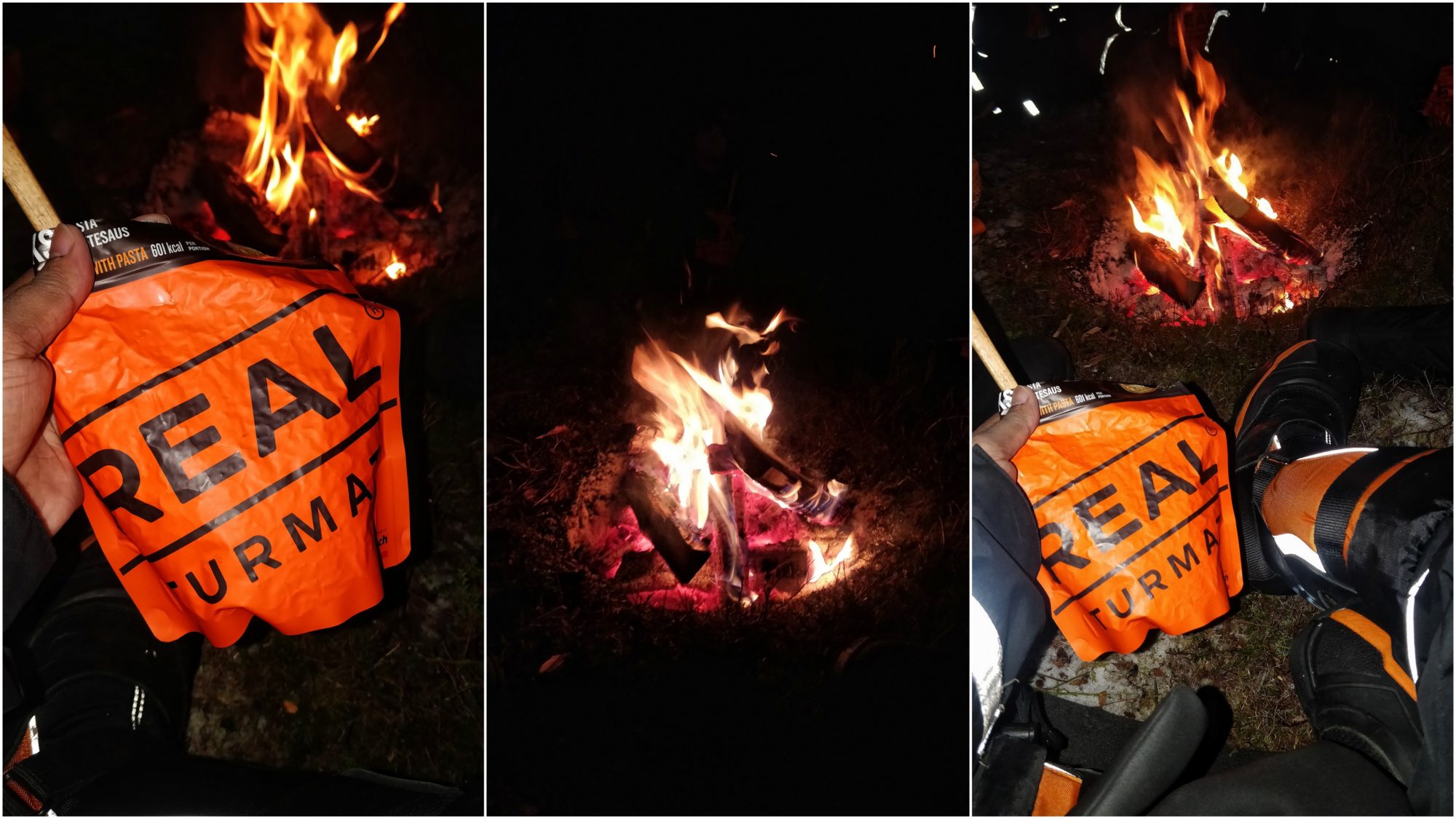 Usually, the chase lasts for 6-7 hours, depending on sightings and weather conditions. This time we started at 6 pm and returned a little after 2 am. In March, the start time is later, at 8 pm and return is around 3 am. For the start sometimes the meetup point is a city center hotel – like Radisson or Comfort Hotel Xpress, but at return usually everyone gets a hotel drop off. The Northern Light Chase pricing for minibus tours starts at 1300 NOK (~10,000 INR) while big bus tours are at 950 NOK (~7500 INR). The pricing includes food, guide, photos and winter wear. It differs across companies on how extensive a gear they offer. You can request for Camera tripods as well. 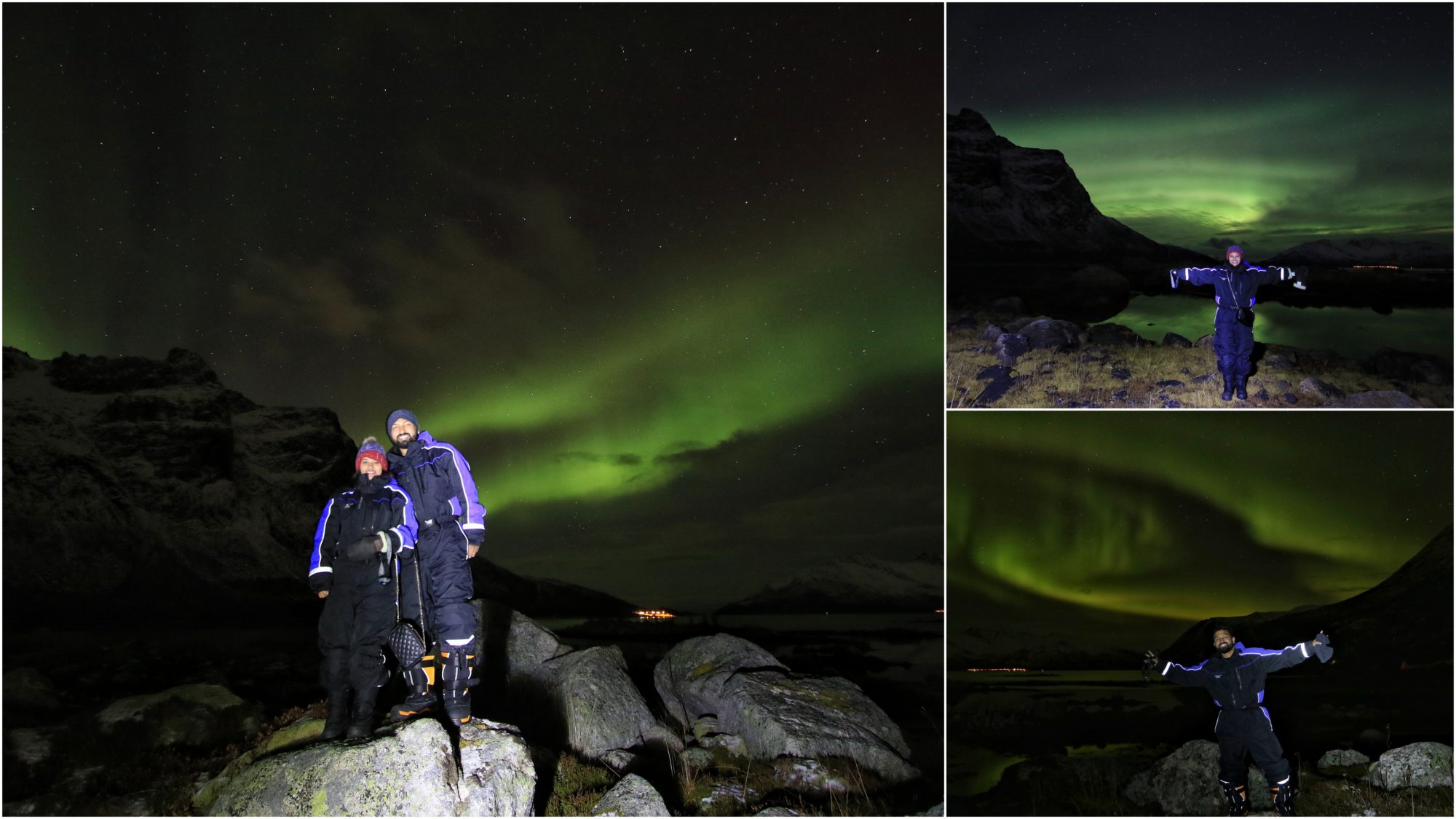 Pictures shared by the tour company

Since this is a chase, there is no guarantee of light sighting or refund if the lights are not spotted. Most tour companies offer a discount if you are opting for the second/consecutive days of the chase, and packages work out cheaper too. If tours are canceled due to bad weather – that is quite rare, then based on company policy the money may be refunded or another day is accommodated. 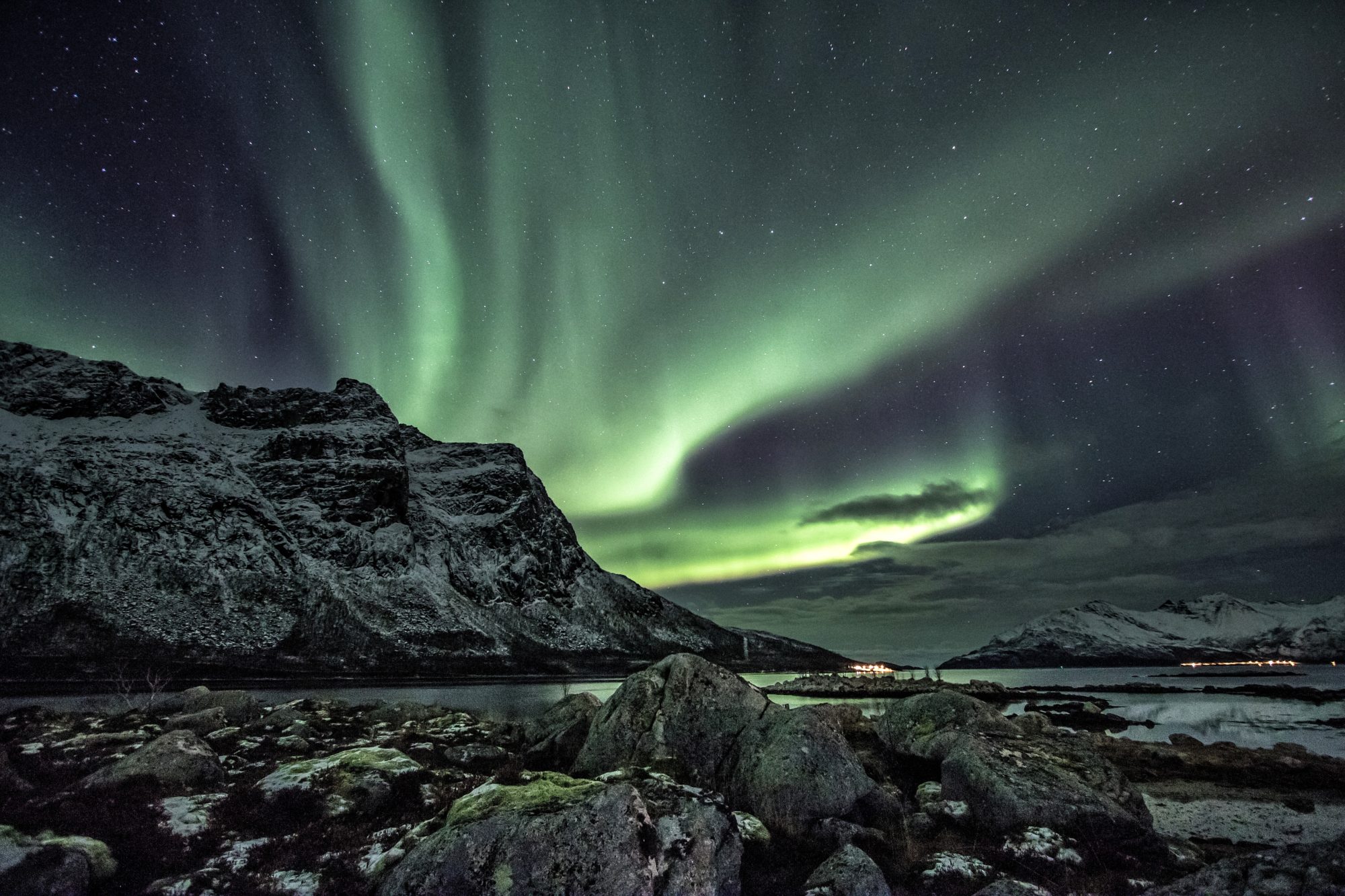 Wear a warm middle layer like a merino wool sweater or light jacket under the thermal suit. Wear a woollen cap and keep your hands warm. If you’re not wearing boots, make sure you have some toe warmers handy or your feet will freeze!

Pick a company that has recent good reviews on Trip Advisor of chasing the Northern Lights, guides change so latest updates matter. Keep a close look on the weather and Northern Lights advisory. Book minibus tours with small groups, you don’t want flashing lights from big groups while seeing the lights or trying to photograph them.